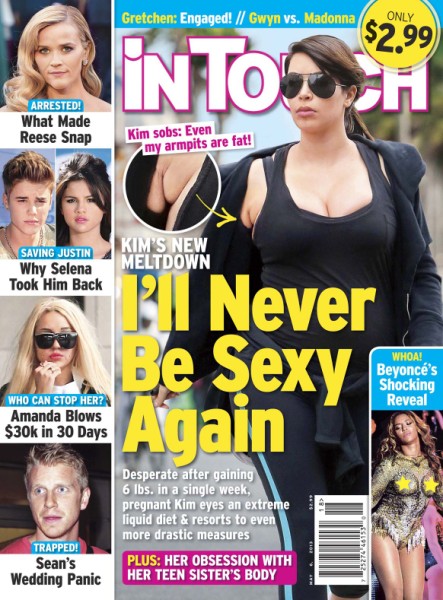 Well… not everyone can be Demi Moore or Jessica Simpson for that matter.

Kim Kardashian’s so disgusted with her flabby armpits that she’s canceled sitting for the iconic photo shoot involving the naked baby bump! Seriously, how could I forget about that? That never crossed my mind. Of course Kim (and Kris Jenner) would be all over Kim pulling a Demi. Anybody who wants to be anybody copies that pose while pregnant. But Kim thinks she’s too fat! Poor thing. “She would have had her pick of any cover she wanted,” a source told In Touch magazine. “It opens her up to too much scrutiny.”

I heard that. I’m all about embracing motherhood blah blah blah but I don’t know why everyone has to do this now. And I also don’t know why Kim couldn’t just do what Jessica Simpson did – pose and get it photo shopped to hell. Alas, we’ll have to wait for the next baby because you know she’ll do it sooner or later. Biotch can’t help herself.

But her baby issues aren’t stopping there. According to In Touch’s new cover Kim’s weight gain freak out is still in full force. She’s gained six pounds in a week and is contemplating liquid diets to stabilize. Apparently there are other drastic measures she’s considering but I doubt any will come to fruition. Riddle me this – if she can go on a liquid diet then why can’t she just eat healthy? It truly is that simple. She isn’t gaining weight because of all the water she’s drinking. But, at this point, why does she even care? She’s almost done. Her nightmare is almost over. Just put your feet up, start eating ice cream and calm the hell down! I’m bored with Kim K’s weight. Anyone else?

Did anyone out there want to see a Kim Kardashian naked baby bump photo shoot? Also, do you think her weight is making her that desperate? Kim Kardashian wouldn’t go on a liquid diet while pregnant, would she? Or is this something she’s planning for after she pops it out? Either way, I can’t see it happening.