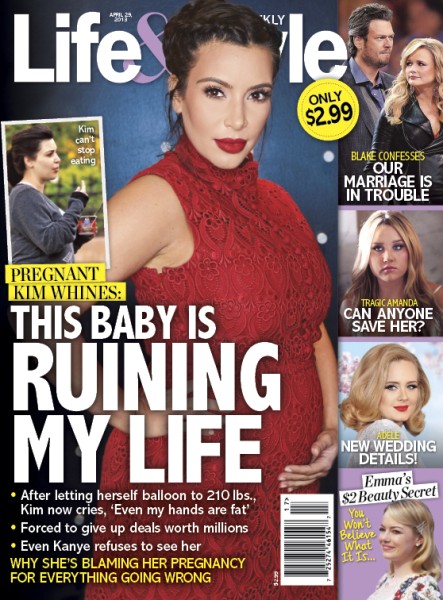 Life & Style magazine is continuing to beat the dead horse that is Kim Kardashian’s weight. It has taken the cover story yet again! It seems people just can’t get enough of Kim and her overwhelming waistline.

This week Kim Kardashian’s baby is taking most of the hits though. It’s ruining her life! Damn you baby! She’s blaming that baby for everything that’s going wrong including the crazy weight, Kanye West’s avoidance and the fact that she’s had to give up multi-million dollar deals during her pregnancy. Why stop there? Let’s blame the baby for the Kris Humphries divorce too! Why not?

Poor little baby. Let’s cut it some slack (it will need it in life I think). Kanye West is hiding out in Paris because Kanye’s an egotistical douche who can’t stand the fact that he’s not center of attention in L.A. The weight is out of control because she won’t stop eating for two and, with all of her appearances lately, I’d like to know what deals she’s given up for her pregnancy. Come on Kim! Just go back to blaming Kris for everything. I like that strategy so much more!

In other Life & Style news, Amanda Bynes is continuing her crusade to be the next child star trainwreck. She’s actually managing to make Lindsay Lohan look sane at this point which is impressive. I love Amanda Bynes movies so I’m saddened by all of this. I’ve heard the head case rumors but I just feel so bad for her. Why isn’t her family putting her on lock down? Britney’s family did it. Maybe that’s just because Britney had more money to lose for them….

And Adele is getting married! Sweet!  But Miranda Lambert and Blake’s marriage is falling apart. Darn! There’s such a sick balance in Hollywood!