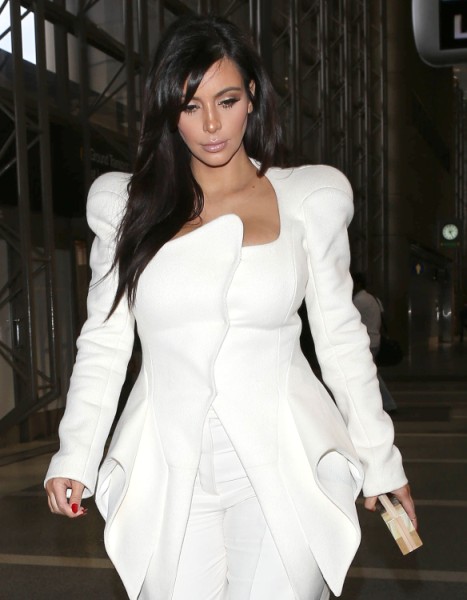 Of course she is! Why not? If she doesn’t blame him she’d have to start scrutinizing her own behavior and that would just be too much. Let’s all blame Kris Humphries’ divorce stalling for the Kim Kardashian miscarriage episode. He’s the one that told her to travel to Nigeria, Paris and Brazil for work. He’s the one that forced her to live in high heels and shoot her reality TV show and he’s definitely the one that told her ass to stay in the gym every day to fight the losing battle of gaining pregnancy weight. Damn you and your selfish ways Kris Humphries!

This is all courtesy of the New York Daily News by the way. It’s reporting that her workout schedule should NOT be blamed. You hear that everybody? Lay off Tracy Anderson! She’s done nothing wrong. It’s actually Kim’s sleep schedule that caused all the pain. A source said her night nights have been all off because of the stress of the pending trial with Kris. So… sleep deprivation probably doesn’t have anything to do with constantly traveling then?

All joking aside, Kim’s people have come out saying mommy and baby are fine but Page Six, who was the first to dish the miscarriage story yesterday, is gabbing today that Kim is still worried because she’s awaiting test results. For what, I have no idea. Apparently a source told Page Six this whole thing was a wake up call for her and she’s going to start relaxing a bit more. Do people really need wake up calls of this magnitude? Kris Jenner had six kids. Kourtney Kardashian has two. These women couldn’t have sat you down and told you to stop all this shit? Some people need to be hit over the head with things. This is the woman who married Kris Humphries after all….

Speaking of Kris again, Radar Online has a story this morning about how he’s pissed that he’s getting blamed for the whole situation and is threatening to subpoena Kim’s medical records to find out what the real culprit is. I don’t think he can do that. That seems awfully invasive but Kris thinks he’s a lawyer now so let’s let him keep having his fun.

Do you think it’s fair Kris is taking the heat for Kim’s health? Shouldn’t she know better or is it just easier to blame the big tall dumb guy?