Kim Kardashian Suffers Near Miscarriage, Disrespecting Baby With Too Much Exercising, Work 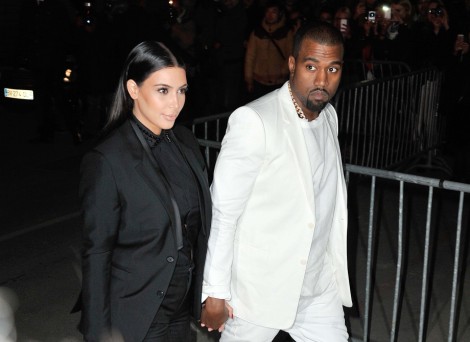 I understand not letting your pregnancy get in the way of your life but Kim Kardashian might be overdoing it. According to reports the jet-setting reality star was rushed to the hospital Tuesday night after her flight home from Paris Fashion Week. Kim Kardashian started freaking out on the plane over feeling ill and feared she was having a miscarriage. Fortunately for her and Kanye West, the ordeal was a false alarm but her doctors apparently had some pretty choice words for her about keeping her ass home for awhile and stopping with all the events and work out sessions.

“Kim’s not respecting her pregnancy,” a source told Page Six. “She’s running around, working out seven days a week. She’s working with two different trainers to control her weight, including Tracy Anderson and a pregnancy trainer. She’s scared that her ass is as big as a couch and is going south. But she is having a very rough pregnancy, and doctors have ordered her to slow down.”

I don’t necessarily think she’s having a rough pregnancy. I just think she’s being a dumb ass. I’m the first person to tell pregnant ladies they don’t need to alter their lives too much while incubating but Kim’s taken it to a whole new level. When it comes to the gym, people say you can basically do everything you did before you were pregnant if you worked out a lot and were in good shape to begin with. As I’ve said before, I’ve never seen Kim work out this much before in my life. It would be different if we saw her at the gym every day before she got knocked up but that was so not the case. She’s burning her candle at both ends and I don’t know why. The baby isn’t going to change anything for her. She’ll still be able to pimp herself out and make plenty of money – more now probably. There’s really no reason to take trips to Nigeria, Brazil and Paris within the span of two months and she’s done all that and, most likely, more. There, that’s all I have to say about that.

The surprising thing for me in all this is that Kim Kardashian’s pregnancy weight gain is actually a major fear for her. I honestly thought that was mostly rumor and tabloid nonsense but she really is having problems with the whole thing. I actually feel sorry for her. Most of us can have babies without Star magazine claiming we’ve gained 65 pounds in four months. I thought Kim had tougher skin like Jessica Simpson but she really doesn’t. I hope she can take a couple breaths and calm the hell down. There’s no reason for all this stress. Listen to you doctors Kim!

Are you shocked by the Kim Kardashian/miscarriage scare? I think this is her second now because the first had to do with stress or something. What do you think the reality star should do?