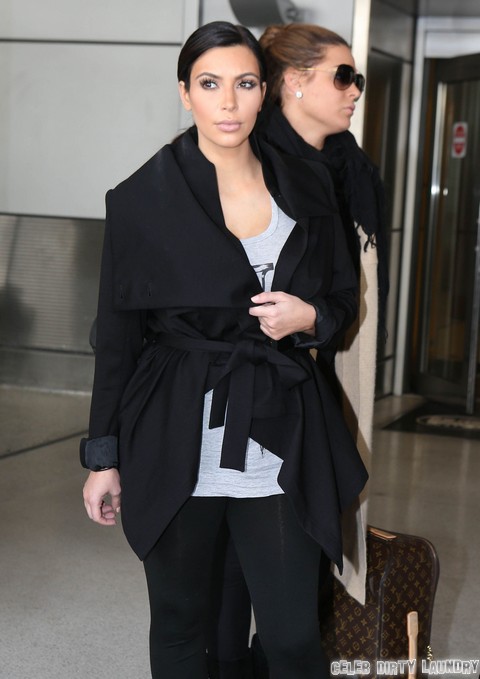 Kim Kardashian is at risk of a miscarriage due to the stress she is under because of her divorce with Kris Humphries.  According to TMZ, who seem to have sources in all the right places, including Kim’s womb, her doctor thinks that the reality star’s unborn baby is at risk due to Kim’s high stress level.  TMZ has determined that the cause of  Kim’s stress is mean old Kris Humphries who refuses to grant his wife of 72 days the divorce she craves.

And why is this divorce so stressful for old Kimster?  Easy – Kris is determined to expose to the whole world that everything about his marriage, and the Kardashian empire, was and is fake, cheap, and deceptive.  It’s not as if we don’t know this already but I guess Kim doesn’t realize we do – so the thought of a public trial in which all of her and Kris Jenner’s lies and tricks are exposed is causing her stress.

Of course Kim could just release Kris from his iron-clad prenup, pay up what she owes him, grant him his marriage annulment, and she would be ‘divorced’ in short order.  But no, she is terrified of what Kris will tell the world if the prenup is voided.  Currently Kris is legally restricted as to what he can say because of the terms of the prenup in contention.  In any case Kim is screwed and she knows it!  If the prenup is voided Kris can tell all about what really goes on behind the scenes in the warped Kardashian/Jenner world, but if Kim stands fast and the divorce goes to trial then everything will be made public anyway!  Even worse, Kim and Kanye West’s baby is likely to be born right when the divorce trial is in full swing this summer.  So yes, Kim is stressed.  I guess that’s what happens when you screw people over – there are consequences.

TMZ reports: Kim Kardashian‘s doctor thinks Kim’s unborn baby may be at risk, because of the stress Kris Humphries is causing by dragging out their divorce … TMZ has learned.

Sources familiar with the situation tell TMZ … several days ago Kim called her doctor in the middle of the night to come to the house because she was having severe pains.  The doctor examined her, but then warned he believed the problems were largely stress-related.

Sources say … the only significant stress in her life right now is the divorce.  And hours before her meeting Tuesday with her lawyer, disso-queen Laura Wasser, Kim’s pains returned in full force.

The doctor warned Kim she needs to handle the stress or else there could be “long-term effects.”  The doctor did not elaborate, but we’re told Kim is freaked out her baby may be at risk.

So there you have it – Kim’s behavior is catching up with her and she is ‘stressed.’ Well I say ‘too bad, so sad,’ but that’s me.  What about you?  Is it possible that you feel sorry for Kim?
Photo Credit: FameFlynet