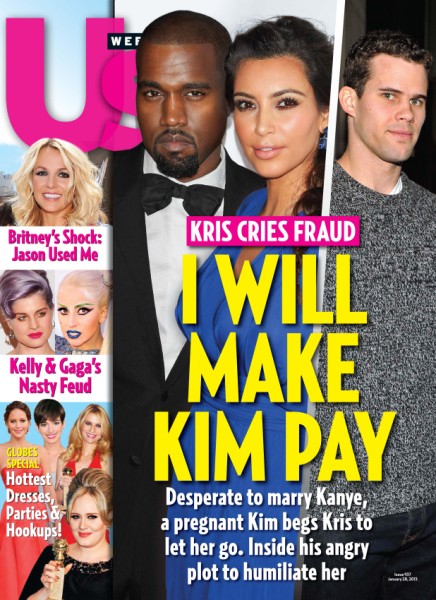 You may think I’ve gone and flipped my lid and forgot I wrote something similar to this a couple hours ago but fear not I haven’t. Us Weekly just got in on the crazy Kardashian fun for this week’s cover. And how could it not? It’s just too fun! Kris Humphries has all the power again! No, seriously, that’s what the article inside claims. Apparently, the newly pregnant Kim Kardashian is ugly crying all over the place because Kris is torturing her with his vengeance by not divorcing her and allowing her to marry Kanye West! Kate Middleton who? This truly is the best celebrity pregnancy story around.

“Kris told his friends the pregnancy is the best thing to happen for him,” a source tells the magazine. “He says he has all the power again.”

Naturally, Kanye doesn’t like this and wants to “confront” Kris (a.k.a. beat him down) but he knows it will only make matters worse. Well, if Halle Berry, Gabriel Aubry, and Olivier Martinez have taught us anything it’s that crazy never helps a situation.

Other notable stories on the cover involve Kelly Osbourne and Lady Gaga. You’ve heard the drill I’m sure. Lady Gaga called Kelly a bully on Fashion Police and then Sharon Osbourne called Lady Gaga and her followers bullies. I’m pretty sure a fifth grader getting harassed every day in school might scratch his head at these spoiled, rich women’s use of the definition but Lady Gaga’s getting talked about again so that’s really all that matters, right?

And then there’s Britney Spears’ shock that Jason Whatshisface finally broke up with her. Do Britney’s meds allow her to be shocked? Just wondering…. I’m not sure how she can be so surprised since Jason was really just hired by her dad to be a babysitter but I’ll give her a pass on this one since I’m never really sure how much of an active participant Britney is in her own life.

So all in all I’m pretty psyched about Us magazine this week. I like the Kris Humphries plotting angle. It’s so much better than the Scott Disick’s a crap dad/Khloe Kardashian isn’t really a biological Kardashian stories out there. Kris Humphries got Munsoned so I just know he’s loving every second of this.