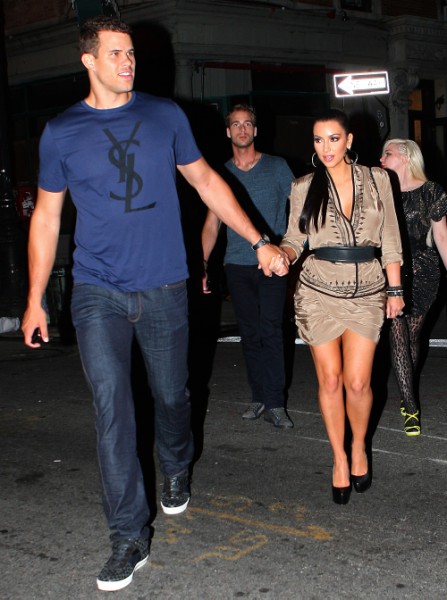 You didn’t actually think Kris Humphries was going to feel any sort of remorse over dragging out his divorce/annulment to Kim Kardashian, did you? I called it before. He’s loving every bit of this. Kim can go on as many day-time talk shows as she wants and try to spin that she and Kanye West aren’t even thinking about marriage but Kris knows the truth and, apparently, he’s tickling himself pink over all the commotion he’s causing. Because Kris picked up a very important tip during his short time with the Kardashian Clan. If you laugh with people when they rip on you, it doesn’t suck so bad.

According to Page Six, Kris Humphries was in NY shooting a Foot Locker commercial when some workers on the set decided to have a little fun at his expense. They plastered the walls around the shoot with tabloid stories concerning a pregnant Kim Kardashian and her baby daddy. Luckily Kris didn’t pull a huge b-tch fit and thought the whole thing was pretty funny. Naturally though, his rep said it never happened.

I bet Kris Humphries laughs about this little predicament all day long as he sits in front of the TV watching old reruns of Keeping Up with the Kardashians. The fact that Kim Kardashian’s still married to him while she’s expecting another dude’s kid cannot be avoided that easily. And Kris is the only person standing in the way of their perfect little family. He could divorce her lickity split if he wanted. He could  grow a heart (after that brain comes in) and decide that everything is just water under the bridge. He could rid himself of that woman and move on with his life. But he continuously chooses not to do so. So I can only think two things are at work here: 1) he still loves her and really doesn’t want to cut the cord; or 2) he hates her so much he’s willing to continue embarrassing himself by being connected to her so he can win his case while also ruining her life for awhile. My money’s on No. 2. What about you?