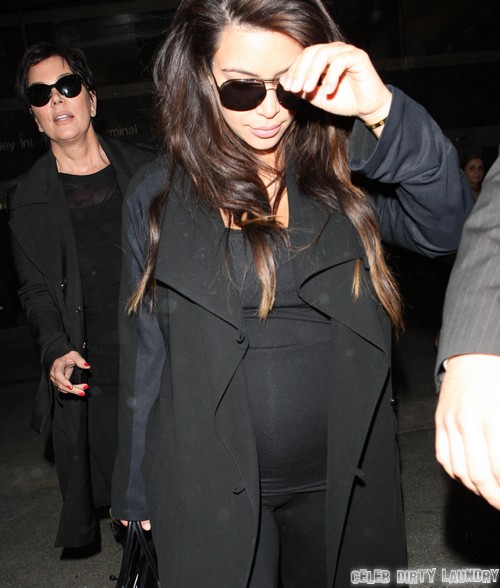 In case you didn’t know, Kanye West is pretty strict about keeping his private life private. That was, until he met up with and banged Kim Kardashian’s self-entitled butt. Now, it appears that every aspect of her life is fodder for magazine articles, media statements, Twitter comments and TV show ratings.

When she got pregnant, she said that they would keep their baby off of the show. As it turns out, that was a lie. She is already pimping the kid out for ratings and he or she isn’t even here yet. We already know that she is planning on revealing the baby’s gender on their reality show, but now we’ve learned that Kim has convinced Kanye to appear for the taped baby shower.

Reportedly, Kim begged Kanye “top stop by the baby shower which is taking place on June 2. The baby shower will be filmed for Keeping Up With The Kardashians, and he just doesn’t want to appear on the show at all, period.”

The source went on to reveal, “Kim nagged him until he agreed when she said it would look really bad if he didn’t show up. Kanye thinks it’s silly to even go to the baby shower since he will be the only man there. He will be there for less than ten minutes, tops. It was important to Kim that he go, so he agreed.”

It was important to ratings, apparently. What do you think?

ICYDK Explains How The K Klan Is Going Broke – This Might Be Why Kanye Will Be Filmed For The Baby Shower – CLICK HERE!