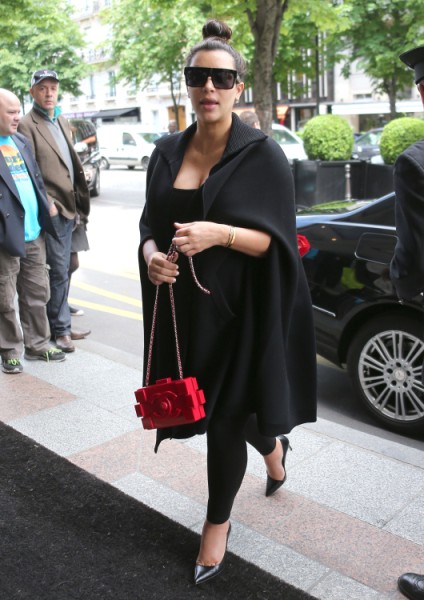 I don’t want to hear about how Kim Kardashian just can’t understand how she’s putting on the pregnancy weight at this point. We have video that clearly explains where those 70 (80-ish?) extra pounds magically came from.

Kim Kardashian cooks on Keek! On Thursday night the reality princess got all domesticated and decided to surprise her “babe” and rustle up some good old-fashioned soul food. The menu consisted of fried chicken, sweet potato souffle, green beans, mac ‘n’ cheese and Kris Jenner’s (most likely boxed) famous brownies for dessert. Was she cooking for all her ex-babes or just Kanye West?

But if you’ve been taking a mental note, like I certainly have, this is the second reference of Kanye West by a Kardashian this week. Khloe Kardashian went on some talk show and denounced claims that Kanye and Kim were over and emphatically argued they’re together more than people know. And now we have this. Are the Kardashians telling the truth or are they just working hard to sell a ghost relationship?

It’s just funny to me that this person who pretty much has her entire life filmed and/or papped needed to take the time to put out MORE video portraying her playing the happy wife for Kanye. There’s definitely damage control going on here. Whether or not it’s in response to a break up is the question. I doubt they’ve broken up. Things just seem rocky as all hell. And Kanye’s professional life probably isn’t helping. Page Six reported today that he’s still working on his album with drops in a couple weeks. Insiders think he’s hustling to create a playable song for the radio since the songs he performed on SNL got mixed reviews. It sounds like this album might not be the hit he’s been looking for. It won’t give him that Grammy he’s always crying about. So he’s got that going on along with the fact that he’s still mostly Mr. Kim Kardashian now. If I were Kimmy, I would have added some biscuits to the menu. Kanye definitely could do some carb eating.

What do you think of the Kim Kardashian/Keek video? Is she trying too hard to convince us her relationship with Kanye is stable?