Kim Kardashian Lying About Pregnancy Weight Gain, Claims To Only Be 140 Pounds 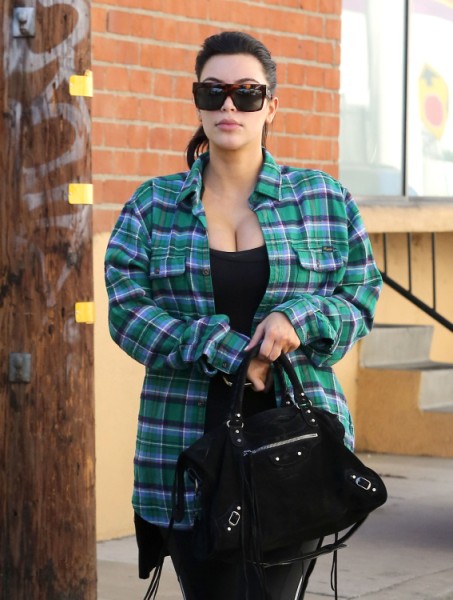 Is she lying to us or is she lying to herself over her pregnancy weight gain? Kim Kardashian claims to only be 140 pounds right now. Well, actually she didn’t say that exactly but she implied it in an recent interview when she said, “There are maybe two or three covers just this week that say I am 200 pounds. I’m like, ‘You are 60 pounds off here’.” Now, maybe Kim’s math is fuzzy. She’s no scholar after all but I’d like to think the whole numbers were easy enough for her in this instance and she was truly adamant in throwing the 140 pounds out there for us to nibble on. Are you buying it? I’m not so sure.

It’s all about proportion though, right? Everyone looks bigger in pictures and Kim’s ass has a lot of pictures. And she’s like 5′ nothing so that doesn’t help. So it’s hard to judge. Her boobs take up most of my attention anyway so it’s tough to focus on the whole thing nowadays. I’m not ripping on her – really. But when you bring up your weight – when you fight back against the tabloids – you open yourself up to this scrutiny. So I’m actually trying to let her off the hook. Her pregnancy doesn’t seem like it’s been much fun so far. It’s been marred by divorce drama, calorie counting and heinous styling. And we’re here to judge at every turn.

You know who the real winner is in all of this? Jessica Simpson. Did you know she was pregnant? Do you know what she’s wearing right now? Me neither! Because we’re obsessed with Kim’s shit style. If I were Jessica I’d send her a thank you basket full of chocolate bars because Kim and little North West are the best thing that’s ever happened to her.

Is Kim Kardashian lying or could she be closer to the mark than we think? Is she doing herself a favor by feeding into all the speculation? Should she just wear her craptastic clothes and smile?