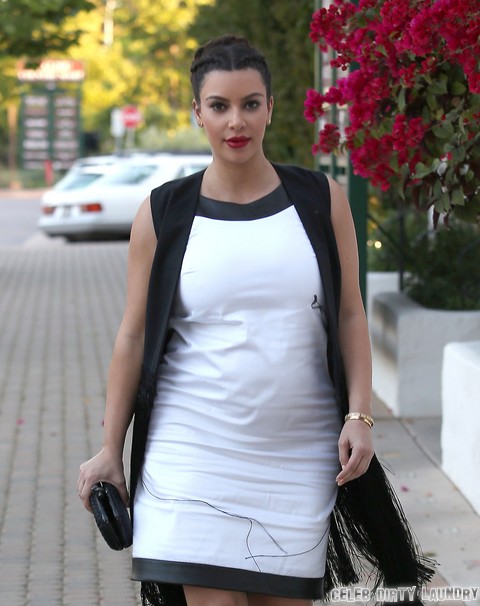 If she wasn’t way too pregnant Kim Kardashian would probably be partying hard tonight. The reality whore is finally, officially, divorced from Kris Humphries after legal wrangling that lasted four times longer than their ill-fated marriage.

It’s a total win for Kimmie too because Kris was unable to prove that the marriage was rooted in fraud so that meant no annulment and no 7 million dollar payday for his suffering at the hands of the Kardashian families film crew.  Kim has anxiously awaited this ruling and has proclaimed how desperate she was to put the past (Kris) behind her so that she could officially move on with baby daddy, Kanye West.

Ironically, Kim’s happy day isn’t exactly helping to mark the happiest point in her life. She is heavily pregnant and one of the most miserable expectant moms-to-be that I’ve ever seen. She’s also clearly not in a healthy relationship with Kanye. Apparently his “perfect bitch” is anything but! Why else would the man CHOOSE to spend only 18 days with her since Christmas? The rest of his time isn’t even in the same country! Kanye is enjoying life in Paris while Kim struggle on her own back in L.A.

Kim may have won the battle with Kris but it’ll likely take a war w while Kanye lives his life elsewhere? Do you think Kim is destined to be a single mom.  Tell us your thoughts in the comments below!