Kim Kardashian Already Embarrassed Of Baby Name, North West, Thanks To All The Hate 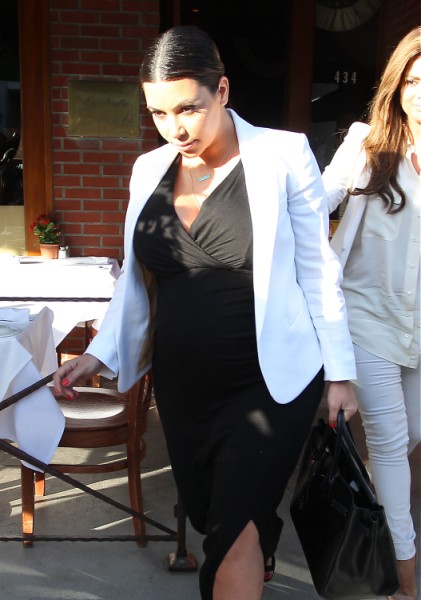 You know what name I’ve got stuck in my head right now? Renesmee. That clusterf-ck of a crap name Twilight launched into our consciousness. And do you remember what her nickname was? Nessie. It was a name so awful it needed an equally horribly nickname. Now, I’m not against nicknames. I just think they should be earned. I have a problem with a parent gifting a kid a crazy ass name but then going up to family members’ shocked faces and saying, “Oh, but we’ll call her Nori.” That’s what Kim Kardashian and Kanye West are essentially doing now. They gifted the world North West but have already issued the much cuter and much more acceptable nickname, Nori. It’s not like North is a family name they had to use like Mildred or Esther. In those cases it would be perfectly acceptable to go for the nickname right away to save the kid some embarrassment. So is Kim Kardashian embarrassed by her choice? The hate is strong with this one. The internet is in a tizzy over her decision. And it might have been a last second one. Multiple sources confirmed Kaidence Donda West but it sounds like in the 25th hour Kanye wasn’t stoked about adding to all the Ks. So they fell on North. And it sounds like they are already regretting their decision.

What is Blue Ivy’s nickname? How about Apple Martin’s? Those kids go by Blue Ivy and Apple. There are no apologist nicknames for the public.  Beyonce and Gwyneth both took shit but they just turned their noses up in the air and moved on. Kim has wicked insecurities and I’m feeling them with this name. And what’s sad is I think a lot of people liked Kaidence. It was kinda respectable – just a little off – but it made sense. North West seems like a joke still. In the back of my mind I wonder if this isn’t a joke to keep the media off the real name for a few more days.

What do you think? I’m holding out hope. Is the baby name North West a decoy or have Kim and Kanye made their final decision? And if it is final, do you think Kim is already regretting it? Why else throw out the nickname so quickly to appease the public?