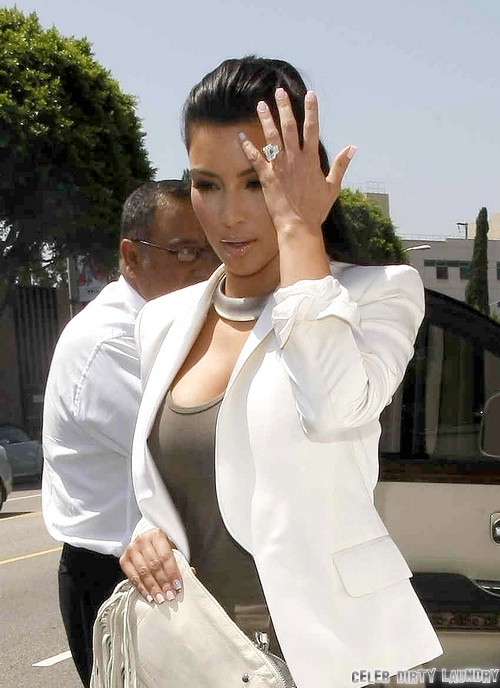 Kim Kardashian is one greedy chick and her baby daddy, Kanye West knows it better than anyone else. While Kim’s 72-day marriage to Kris Humphies was dubbed a huge mistake by the reality whore, she had no problem accepting the man’s gifts and when it came to her $2 million dollar engagement ring, Kimmie intended to hang on to those 20 carats for eternity. At least until Kanye found out about it.

According to the Sept. 30th print edition of Star Magazine Kanye only recently realized that his lady was still holding the ring hostage and he flipped out. Apparently even Yeezus has more of a conscience than Kim and he couldn’t understand why on earth she would even want to keep a ring from a guy she insists she never should have married. It was a huge issue between the couple right up until the moment when Kim finally returned the rock to Kris.

Ironically the ring is now up for auction and is expected to fetch a mere $300,000 which means that aside from his pride and part of his soul, Kris also lost a lot of cash in the few months that he was Kim’s husband. Can you imagine how ugly that fight between Kanye and Kim likely was? I mean we know that the dude has serious anger issues in public so can you imagine how ugly it must be behind the scenes?

Should Kim have voluntarily given the ring back? Is this just another example of how shamelessly entitled and greedy this piece of work really is? Maybe she was hanging on to it to pawn herself once the Kardashian money making machine goes broke. Tell us your thoughts on Kim, Kanye and Kris’ bling in the comments below!