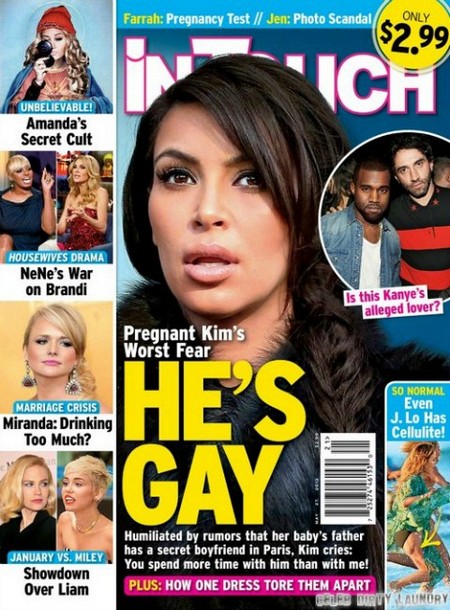 Pregnant Kim Kardashian’s worst fears might be coming to light! Is her boyfriend Kanye West really holing up in Paris because he’s busy hooking up with a male clothing designer there? Kim is miffed apparently that Kanye is basically banging the help like he’s Britney Spears while she’s busy incubating their first child.

From the tabloid’s report:

When fashion bloggers slammed the flowery Givenchy dress she wore to Anna Wintour’s exclusive Met Gala in NYC, it was clear that 7-months-pregnant Kim Kardashian was crushed. But her humiliation ran much deeper than just a gown. Online commenters are speculating that her boyfriend, Kanye West, is in a romantic relationship with the man who designed her controversial dress, Givenchy creative director Riccardo Tisci! “Kim’s freaking out,” says a friend. “If it turns out Kanye is involved with Riccardo, she will be utterly embarrassed – more so than she’s ever been in her life.”

Could that be why Kim was ordered to wear that hideous dress? Perhaps Kanye’s gay lover was miffed that he decided to take her to the Met Gala, so he wanted to make Kim look utterly ridiculous and stupid? Seems legit. What do you think?