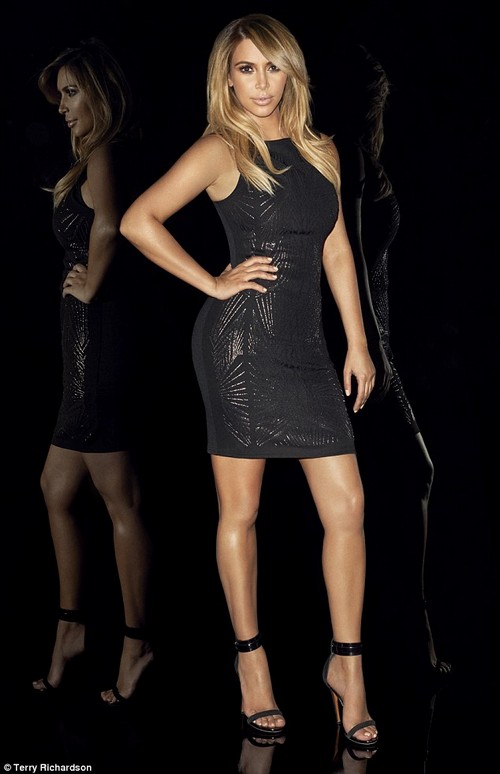 Kim Kardashian seriously can’t do anything right when it comes to her image. Who was the genius that thought she should post an ass shot of herself a week before her first promo photos after having North West came out? There is about a 30 pound difference between Kim in the white butt munching bathing suit versus the photo shopped chick advertising clothes for the failing Kardashian Kollection.

Now comes her first real interview (with the Sunday Times) since becoming a mom and guess what, Kim doesn’t come across as very connected to her baby! I know, you’re shocked, right? Instead she dishes on the need to dress North in light colors and her focus on weight loss. No random tidbits about what her baby is doing these days or something that would prove that she is emotionally connected to her precious bundle. Instead Kim is doing what she does best, discussing herself. And her clothing… her body… her man… looking hot.

No wonder Kourtney Kardashian is fuming at her sister! This interview also makes it easy to understand how Kim could leave the country for nearly a week while her infant was left with a team of nannies – she still is putting herself first. Apparently no one told Kim that the baby is supposed to come first and that looks aren’t everything. We don’t care what Nori is wearing, how are her motor skills?  I have to wonder if naming her kid after a direction makes it easier to disconnect. North is such a cold word in general, if you hang it on a kid as a moniker it’s still not going to dredge up any warm and fuzzy feelings, right?

Are you sick to death of hearing this chick’s narcissistic babble? Don’t you feel sorry for her daughter? Make no mistake, this kid will be raised by the nanny, just like Kim and her sisters were! Tell us your thoughts on Kimmie in the comments below!

UPDATE: Kim and Kanye are engaged – do you think they remember they have a daughter?