Kim Kardashian Calls Kourtney Kardashian A Bad Mother, Does She Have A Point? 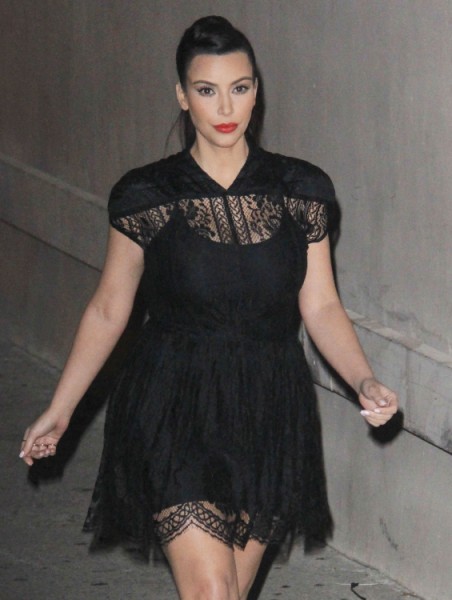 I’ve been watching Kim Kardashian answer this question over the past few weeks and she’s always doing it right next to big sister, and mother of two, Kourtney Kardashian which has got to be awkward as all hell. You’d think she’d get smoother as she answers it but she keeps stumbling which makes it even worse.

It’s all over the fact that the reality queen has decided not to let her baby film on her family’s reality show. “The baby is not going to be on our show. When he or she decides that’s what they want to do, then that will be a decision. It’s a tough decision. From the start, as of now, that’s just a personal choice that Kanye and I have made… We’re going to try to keep it as private as possible,” she said last night on Jimmy Kimmel Live.  Kim Kardashian worried about privacy all of a sudden?  Come the ef on! She’s just holding out for her own show!

But it’s got to be hard if you’re Kourtney Kardashian having to sit by quietly and listen to all this hypocritical drivel. As you know Kourtney has pulled babies out of her vagina on camera and Mason and Penelope are steady fixtures. Last night Kim seemed to recognize her comments could offend her sister so she backpedaled saying, “I love seeing Mason and Penelope on TV. Mason is the highlight of our show, I think.”

So what the hell does that mean?

I should go easy on Kim. Living with a large family is difficult because when you don’t do something like someone else it automatically comes off like you think they did it wrong and you’re doing it right. By not having her kids on the show Kim is essentially saying it’s sick to use children on reality TV since you don’t know how it will affect them in the future. I can actually see both sides on this one. Kim has a much higher profile than Kourtney and her children will be under greater pressure from the media so sheltering them as much as she can is probably the best decision. But I don’t think Kourtney is setting her kids up for years of therapy either. They’re so young they have no idea what’s going on. If she continues to keep them on the show that might be a problem but for now they’re probably fine playing for the cameras.

Both women can most likely agree they don’t want a Kris Jenner situation on their hands. She filmed Kendall and Kylie perfecting stripper pole moves when they were super young – not exactly the most appropriate thing to do for a “family” show.

Do you believe Kourtney is unconsciously following in her mother’s footsteps and allowing things that might label her as a bad mother? Kourtney Kardashian seems smarter than that, doesn’t she?