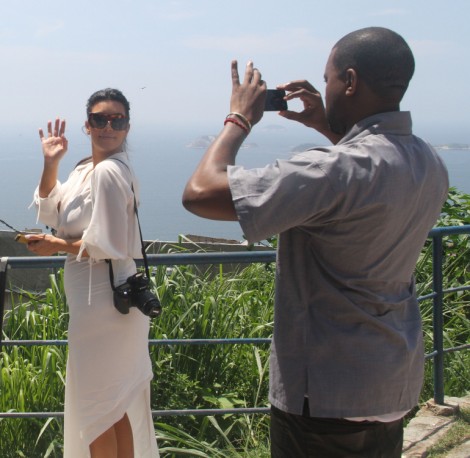 Has it been driving you crazy? Oh God, it’s been making me nuts all morning. I can’t find the connection. Why the hell is Will Smith hanging out with Kim Kardashian and Kanye West in Brazil? Kim Kardashian has been sporting her bump all over the country the last four days and I still don’t really even know why. Reports say she and Kanye are meeting with a architect for their Bel Air home but why they couldn’t have flown him to Los Angeles I have no idea. I suppose Carnival is always a nice incentive to check out Rio. But that still doesn’t explain the Will Smith connection. Some reports say Will and Kanye are making music down there. Others say the superstars just bumped in to each other and decided to sightsee together. I prefer MediaTakeOut’s take on the whole thing. The website insists that Will Smith is stepping out on his wife again.

MTO writes that Will has spending more and more time in Miami in the arms of  Miss Haiti Universe 2010, Sarodj Bertin. The proof? Well, there’s a pic they’re both in and Will was recently spotted at Montreal Fashion Week where Sarodj modeled. So is this a cut and dry case? Hell no. Will and Jada have face the cheating/break up rumors for years now and still have managed to keep their shit together. They’ve been married for 15 years now so I don’t think it’s the biggest deal for them to take vacations on their own. And maybe Jada in Brazil too? Maybe she just didn’t want to hang with Kim Kardashian all day. Can you blame her? I’m just saying… I love a Will Smith conspiracy story as much as the next person but I need a little more evidence to totally fall for this one.

On a cattier note: Will Smith’s looking old! He’s looked the same for so long it’s shocking to see him actually look his age in some of these pics. Good for him for not screwing with his face but I can’t help but have a twinge in my heart for the Fresh Prince. He was so adorable!

Do you believe the Will Smith cheating rumors?