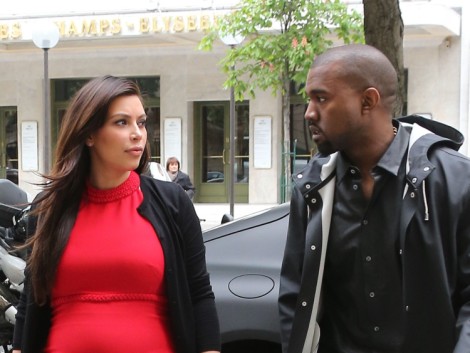 I hope these two announce a name soon. If not, we’re going to keep hearing these kinds of stories. Apparently, Kim Kardashian and Kanye West are coming to blows because they can’t quite decide on a name. Actually it’s more like Kanye and the whole Kardashian clan are going at it. He’s not following the whole ‘K’ thing and these people clearly love their alliteration.

North West is still in the picture! According to In Touch magazine, North is still at the top of Kanye’s list but Kim isn’t feeling it. Perhaps because it’s the dumbest freaking name in the entire world? And it doesn’t begin with a K. I suppose they could be all creative and spell it Knorth but I don’t have time to discuss how much hate they’d get for that. Remember, at the end of the day, Kim really does care what everyone thinks.

But with all this back and forth and waiting you’ve got to expect the worst, right? Kim Kardashian’s baby name is not going to be anything as simple as Karen or Kelly. She’s going the Apple/Moses/Blue Ivy route for sure. I still like Kleopatra. Is this baby not royalty in their eyes after all? And I think Kim will have the last word in the end. It’s a girl and I think it’s a given that they’ll use Kanye’s mom’s name as the middle name. So Kim should get to choose the first name. If it was a little boy maybe she’d give him more leeway and he could have his Knorth but mothers are particular about their girl names.

What do you think? Are Kim Kardashian and Kanye West fighting over what to call their little bundle? Is that why we still haven’t received any news yet?