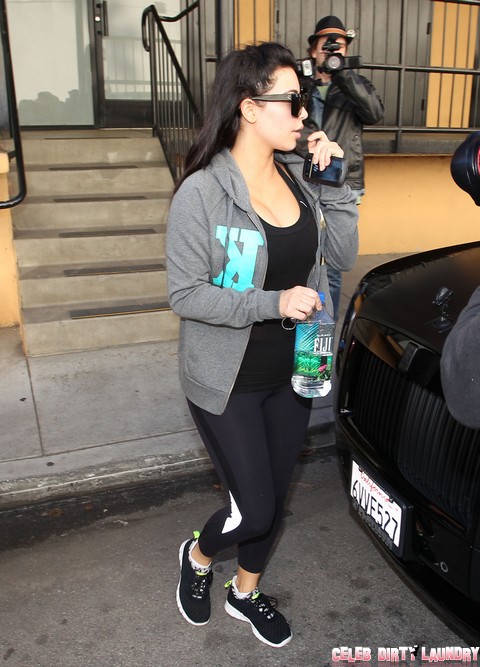 Kim Kardashian and her baby daddy, Kanye West, are house hunting! (Don’t tell anyone, but they’re looking to find a house next to Publicity Stunt Ave and Fame Whore Rd) According to a latest report from Celebs Gather, “The couple is eager to find a home suitable or raising the next member of the Keeping Up With The Kardashians gang.” Yes, they need a house to raise the baby in – far from the curious and grasping hands of Kris Jenner.

The couple was recently spotted driving around Los Angeles looking for the perfect “Baby House”, but there’s no news on whether they found anything suitable to raise the child in. All we know, and all Kim K knows, is that the house needs a mural of her, hand painted by little people dressed in tutus and terror – a la Farrah Fawcett post-Tatum O’ Neal. She already owns a home in Calabasas – close to the filming of her family’s reality television show – and he owns a home in Los Angeles as well as a swanky apartment in New York City – he is, after all, one of the most annoying musicians on the planet, so of course he needs a place to crash when he annoys himself.

Unfortunately, although both of these fame whores need to eventually tie the knot before the baby is born – they’re conservative like that (yeah, right!) – Kim K still needs to deal with her ex-husband, Kris Humphries. The divorce saga is one of the most anticipated events of 2013, and until she has dealt with this past issue, there’s no way in hell Kim K will be able to move on and settle with the man who punched Taylor Swift (we don’t blame him anymore).