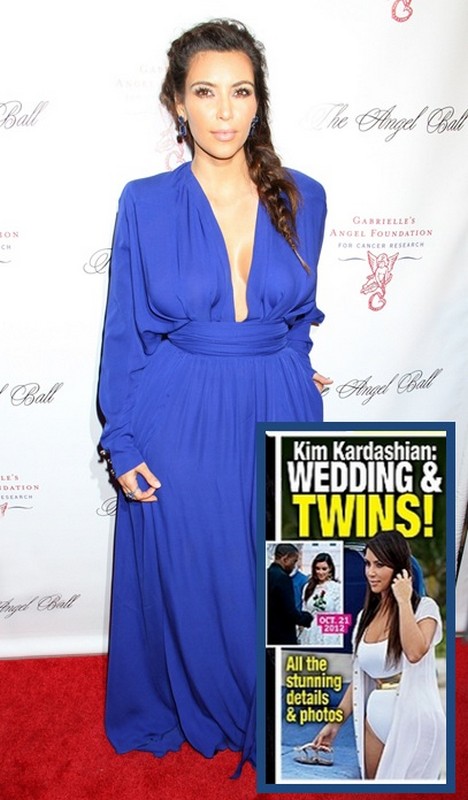 The National Enquirer is reporting on a possible baby or babies in the near future for one Ms. Kim Kardashian.  Kim just returned from an amazing surprise birthday trip to Italy with her man Kanye West.  Best Boyfriend Ever!  Several pictures were taken of the two looking happy as ever… almost honeymoon like.  Did Kimmy and Yeezy secretly get married?  Well, it sure looks that way judging from the cream colored wedding style dress she was wearing on one of their outings.  Can an outfit be that telling?

Well, judging by the fact that Kim Kardashian already has 2 marriages under her belt, I’m going to go with no.  I’m apt to believe that she will be a little gun shy this time around, especially considering that she is still legally married to Kris Humphries.  Pretty sure that one is going to drag out for awhile.

Will Kim and Kanye be having those babies anytime soon?  I’d believe this one before the marriage rumors.  Even though Kim’s been working on her fitness and trying her best to be slim and trim she is still having baby fever after watching her sister, Kourtney Kardashian, give birth and even going so far as to freeze her own eggs.  Did she really just freeze them or were those babies already put into production?  Again, I will ask if an outfit can be telling.  In this case I’d venture to say yes.

Prior to her birthday abroad she was photographed wearing a white one piece swim suit which did not hide ANYTHING below her waist.  Pregnant?  Not pregnant?  Surrogate?  Only time will tell.  What do you think?  Will Kim be a mommy soon or is this latest rumor just another ratings ploy?  I know I’ll be watching to find out.