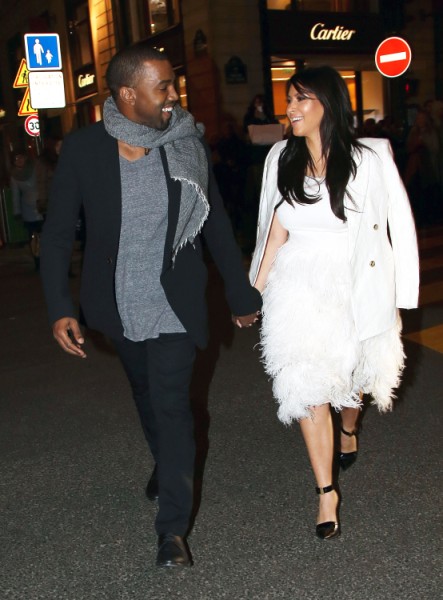 Because, why not, right? You’re pregnant for the first time and you want the whole world to feel your happiness. Why not pose naked on a cover with your baby daddy? I’m actually surprised Kim Kardashian shared the spotlight (but that may say more about Kanye West than it does about her). I actually expected her to pull a Demi Moore and cradle her naked baby bump on some cover instead. It probably wouldn’t be Vanity Fair like Demi’s or Elle like Jessica Simpson’s. I’m seeing more of an OK magazine spread but it would be enough for a Kardashian. Still, she isn’t far enough along yet. She’s still got a couple months to shoot that iconic pose because Kim Kardashian is nothing if not an icon, right?

You can check out the  L’Officiel Hommes cover below. It’s not exactly the classiest shot in the world but I actually think it’s kinda pretty. Their skin tones really pop in the black and white. But Kim may be kicking herself in the ass over the timing because the tape that made her a household name and made it possible for her to do sexy “high art” like this is back in the news. According to TMZ, in what will be known as the Sex Tape Fire of 2013, Kim Kardashian and Ray J’s masterpiece was almost lost for good – almost. Vivid Entertainment hosted a raging blaze this weekend and Kim’s master unedited tape almost got scorched in its vault. Yes, you heard me, it’s housed in a vault. Everyone relax though. Thank the Lord it’s fine and well preserved for our children and our children’s children.

So what do you think of the Kim Kardashian/Kanye West naked cover? Cheesy or sort of classy? Inappropriate? If we held Kim to normal, perhaps higher standards then maybe. But it’s like I said before – she’s a Kardashian. Simulating sex on a cover with a man who knocked you up but you can’t marry because you’re already married to some other douche is what they call a Tuesday.