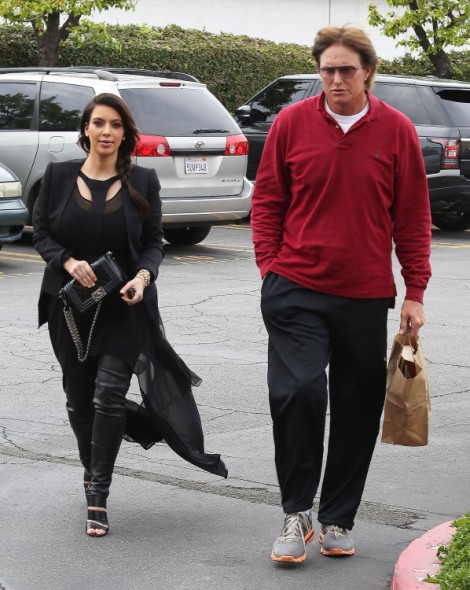 I know, I know. There’s been a lot of Kardashian news lately but this was just so weird I wanted to touch on it before the weekend. Did you know that Bruce Jenner has only met Kanye West once? Or that Brody Jenner has never even met the guy? That’s what I just learned as Bruce and Brody were interviewed by Maria Menounos for the upcoming season of Keeping Up with the Kardashians. Bizarre, right?

First of all, let’s get to Brody. Kris Jenner is going to rip him a new asshole when she sees this video. He was obviously put on with his dad to control his rambling mouth and brother he did not. Brody knew the talking points. He knew to tell Maria that Kim is very present this season. He knew to point out that this Sunday we’ll all know the sex of the baby. But somehow Maria kept getting Bruce to talk and what’s good for us and gossip isn’t necessarily good for the Kardashians. It was awesome. Maria asked if there has been some male bonding going on between Kanye and the rest of the men and Bruce was all like (I’m paraphrasing badly), “The dude’s never around. He’s always in Paris!” Then Brody chimes in with a “I’ve never met the guy” moment and we’ve got ourselves an issue. Brody knew it was bad so he tried to salvage everything by saying Kim has said lovely things about Kanye but, seriously? That didn’t help anything. It just made the situation more pathetic.

How long have Kim and Kanye been together? Over a year, yes? And she’s having his baby and they’re reportedly getting married sooner or later. But he’s only met her step-father once. WTF? Is that weird to anyone else? How about rude? If anything, it’s kinda rude.

Now, one might acknowledge that Bruce isn’t important. He barely knew Lamar before that marriage happened, but in all fairness to Odom, he’d only known Khloe a month at that point. Meeting all the Kardashians takes time! Kanye’s had time he just hasn’t had the effort to make it happen. If that doesn’t tell you something about this relationship and the people in it then I don’t know what does. FREAKIN’ WEIRD. And Kim just made that lovely cooking video on Keek trying to convince us that Kanye was coming over for dinner. I’m beginning to think he couldn’t make it at the last minute….

Am I alone in the Bruce Jenner/Kanye West issue? Is Kanye West never around or does he purposefully stay away? And if so, why is that OK for Kim?