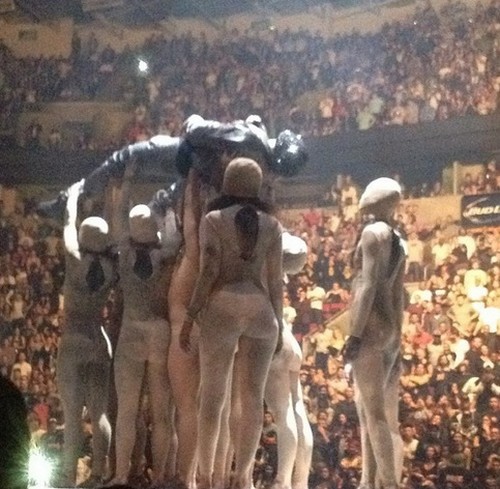 Just when you thought Kanye West could not get any more obnoxious, he proves you wrong. His Yeezus tour kicked off last night in Seattle at the KeyArena and more than 15,000 fans attended. Fans were treated to a religious-themed concert and at one point Kanye even had a man dressed like Jesus walk in.  When he saw him he said, “White Jesus, is that you?”

You can imagine what religious fanatics are saying about that. One person tweeted in reaction, “I’m sorry, but Kanye West is an egocentric pr***, struggling with being accepted for a superficial level of greatness.”

Before the show started Kanye was spotted arriving with his baby mama Kim Kardashian – their daughter North West was noticeably missing. It seems poor Nori was left at home with the nanny again. Kim has no time for Nori she is heading to Las Vegas to host her birthday party on October 25th, 2013. Kanye will not be there he will be entertaining a crowd at the MGM Grand Garden Arena a few blocks away. So you get two choices, you can party with Kim Kardashian for $40 or you go and see Kanye perform for $300. How lucky are we?

Meanwhile fans of Kanye loved the concert and raved about it.