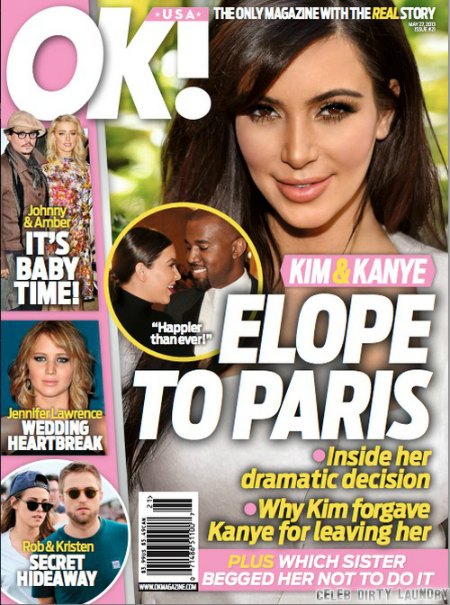 Kim Kardashian and her boyfriend Kanye West are apparently going to Paris to elope! Who knew?!? We’re betting In Touch Weekly didn’t know…Ha!

In Touch is claiming that Kimmycakes fears that her rich rapper boyfriend is gay. That would make sense if he was hooking up with the guy who designed her funky, ugly looking dress for the Met Gala. Anna Wintour would be so pleased if that was the reason why Kim looked like she was wearing living room upholstery as a dress.

The tabloids need to learn to get their stories straight. Is Kanye in Paris holing up with his boyfriend or is he happier than ever after eloping with her royal Kimness. Heh. We bet that he’s trying to convince her to have the baby there and stay there. In the end, it won’t work and she’ll be in a situation like Halle Berry. It’ll be the custody battle of the century. Two famewhores fighting! We’re calling it now.