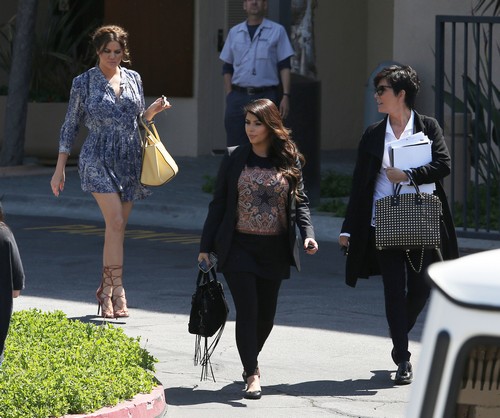 The Kardashian Family‘s hold on Reality TV may disappear entirely by 2015. If only it was that simple to get rid of Jenner. Yeah, there is no removing Kris from in front of those cameras unless it’s by a body bag. She’s that hardcore. With contract negotiations approaching, “maintaining their brand image is paramount [right now],” branding and marketing expert Liz Goodgold tells RadarOnline.

Well, I don’t know what Radar is talking about. Scandal is their image; while sometimes they might try to fool everyone, promoting the image of a clean, cookie cutter American family is not their forte. The empire was built on a sex tape and then sustained by speedy marriages and babies. Khloe Kardashian’s future divorce from a druggie that couldn’t even keep his pants zipped will be just another cherry on their scandal cake.

As for the statistics . . . . All I have to say, where are the numbers? People love throwing out that their Realty series has lost ratings or that their brand isn’t selling as well, but the truth of the matter is is that they’re still bigger than ever and unless specifics are given then claims of their crumbling empire is all hearsay.

The one thing that could potentially harm their empire and threaten contract renewal would be Lamar Odom, if he ever decided to truly spill the beans on the family. “If Lamar were to break that omertà by exposing their secrets, Goodgold says, the show would likely not be renewed, because the “scope and scale of how they manipulate the media [would truly be] unveiled.” But who hasn’t manipulated the spotlight to their own benefit. We see the royal family do that everyday. That’s how publicity works.

Anyway, everybody knows that this family is “fake.” But that never stopped people from watching the show before. What do you think about these recent rumors contemplating the Fall of the Kardashian Empire?