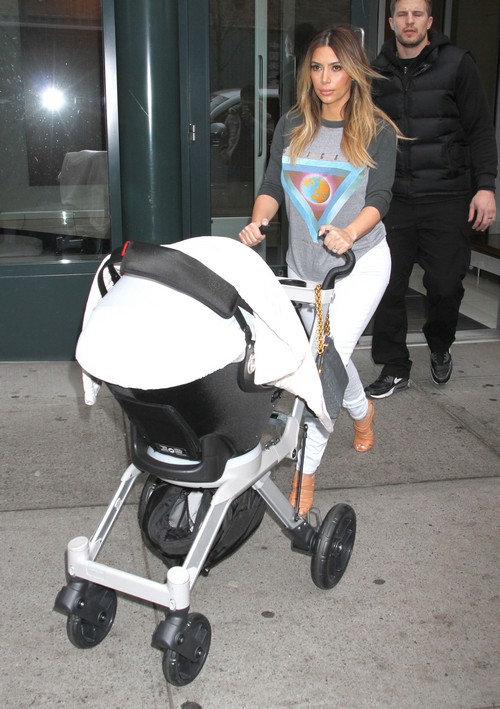 According to the latest report from Star, Kim Kardashian and Kourtney Kardashian are feuding over who can take more advantage of their kids. Damn, the Kardashians are exploitative, but are they THAT exploitative?

A source explains that Kim and Kourtney are locked in a battle over who can make more money off their kids, saying, “North West is already commanding six figures, thanks to a $500,000 offer for photos of her first birthday party.” Apparently, Kourtney is ‘green with envy‘ that Mason [Disick] and Penelope [Disick] don’t command that kind of interest, with the source adding, “When Kim told Kourtney about the offer, Kourt got insanely jealous. Mason’s fourth birthday is on December 14, and no one wants to pay more than $15,000 for the exclusive photos of his party.”

Well, Kourtney wants to make money off her kids, does she? Well, the solution’s simple. Go back in time, sell a sex tape, get famously married on television and then divorced a few months later, and then hook up with a famous musician. That’s pretty much Kim’s claim to fame, and by extension, North’s. But even with that, I doubt offers have been put in for exclusives on North’s first birthday party considering she’s still not even five months old.

Also, Kourtney’s always seemed like one of the most down-to-earth Kardashian sisters, which isn’t saying much. But she’s resisted the urge to pimp out her kids so far – so is that because nobody wants to take pictures of her kids? Or because she’s refused to take advantage of them? Honestly, I could believe either version, but it’s much easier to trust that Kourtney is jealous of Kim. All the sisters are probably jealous of Kim, since they were all raised with the idea that fame and attention are the best things in the world, and Kim has the most prominent public profile out of the lot.