Kris Humphries’ Ex-Girlfriend Myla Sinanaj Tell-All Book About Kim Kardashian And Her Family – What Does She Know? 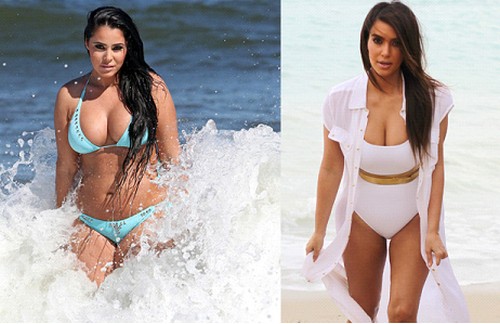 According to a new report from Radar Online, Kris Humphries‘ ex-girlfriend Myla Sinanaj is writing a tell-all book about Kris, Kim Kardashian, and Kanye West.

According to the report, Myla started to learn everything about Kim when Kris used to bashed his ex in front of her. Then, she was deposed during the divorce trial between Kim and Kris, during which she was exposed to a great many secrets from the Kardashian clan.

A source also explains that Myla will not be holding back with this book, explaining, “The last year and a half have been so insane and Myla really wants the truth of what happened to be out there… People deserve to know the truth about Kim. Myla’s telling everything. She’s going to include all the legal documents, subpoenas, that she got from Kim, and even her wedding invitation. For the first time, she’s going to tell the world about the tricks that Kim tried to pull during her divorce.” Uh, I think people already know the ‘tricks’ that Kim pulled during the divorce, and I think anyone who knows Kim Kardashian also realizes that her marriage to Kris Humphries was a giant fraud.

Another problem with this ‘tell-all book’ is that none of the ‘secrets’ that Myla is intent on revealing seem all that surprising. For example, the source explains that one particular topic that Myla touches upon is Kanye’s hygiene, explaining, “Kim used to bash Kanye all the time back in the day. Kris told Myla that Kim said Kanye smelled ‘down there.’ I guess it’s because he always wears the same clothes all the time!”

Ok, and…? If that’s one of the biggest stories in the book, I doubt anyone’s going to buy it. Nobody knows who Myla is, and you don’t have to be a genius to figure out that she’s just trying to extent her fifteen minutes of fame. And besides, most of these stories have already been hashed out in the tabloids.

It’s a sad day when there are bigger famewhores than Kim Kardashian in the world. A sad, sad day.