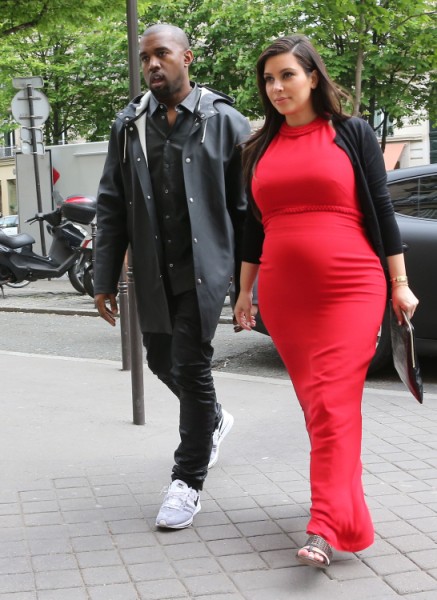 It’s like I said, Kim Kardashian just had to decide on whether she was going to put up with Kanye West’s ego or not and, predictably, she’s all “Thank you sir may I have another?”. Reports surfaced this week that she was furious Kanye was going ahead with his tour just weeks after their baby was set to be born. Many assumed Kim would stay behind since newborns need schedules and nurseries are probably more comfortable when they aren’t on wheels. Dealing with a baby for the first time is hard enough, dealing with one on a Kanye West tour sounds like torture. But Kim is nothing if not a glutton for punishment because TMZ says she’s taking that baby on the road.

According to sources Kim Kardashian’s baby’s bags are packed because the family has already contacted the touring company about cribs and soundproof hotel rooms at every stop. This is annoying. I know it’s probably not a big deal. When you have that kind of money it’s easy to make things comfortable. It’s not like this is the first couple to take its kid on tour. It just seems like another example of Kanye doing whatever Kanye wants to do and Kim having to sacrifice and follow him around. Do you actually believe she wants to be on tour? Is this why she hasn’t signed anything with weight watchers? How can she be around her trainers when she isn’t in L.A.? This will definitely hinder the weight loss and don’t bitch at me for bringing that up because you know she’s thinking about it. How many nannies do you think they’ll bring? You know she ain’t doing this all by herself!

Are you surprised by the Kim Kardashian/baby on tour idea?