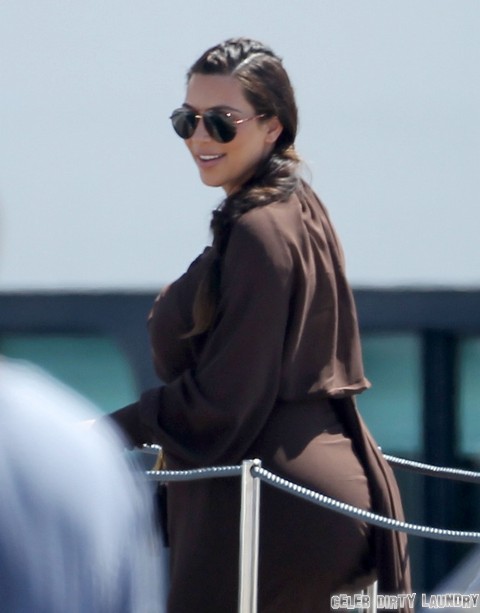 Remember when Kim Kadashian was pregnant and we all expected her to be pimping out her child’s photos to the highest bidder the minute she gave birth? Yeah, well she still will no doubt profit off of month old North West, but as of now Kim is still living a much quieter life. After weeks in hiding at her momager, Kris Jenner’s home, Kim finally ventured out in public with little Nori earlier this week.

She was spotted out in Southern California with her nanny and rather than causing a big ruckus Kim instead was out on the down low, even covering Nori’s car seat with a blanket. According to Radar Online Kim is looking great, much thinner then the last time we saw her. She still has quite a ways to go before she’s hot and bikini ready again. Any woman that has had a baby will tell you, dropping a nice chunk of weight at first feels great but there’s a huge difference between looking great after having a baby and simply looking great.

Maybe, just maybe Kim really is going to live her life a bit differently now. I mean, who would have ever expected her to step out with her precious bundle without making sure that the press was on hand to capture the perfect, staged first photos? Just knowing that she ventured out with her baby like a normal new mom would is pretty remarkable, don’t you think?

How do you think that Nori will make her official public debut when the time finally comes? Will we get a photo spread or will Kim and Kanye finally show up together somewhere to show off their new baby and to pretend that their version of happily ever after really is within reach? Tell us your thoughts in the comments below!