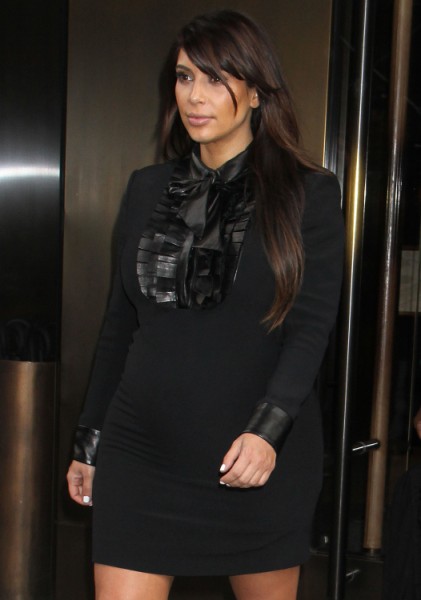 Didn’t we call this months ago? Wasn’t this the whole point of her self-appointed exile? Kim Kardashian’s post-baby body is supposed to make us forget about all those months of fish lips and sausage feet. And breastfeeding must be doing her body good because a source tells Radar Online that she was just spotted out with North West for the first time since the birth looking noticeably skinnier.

“Kim looks amazing, she really does. She’s dropped a lot of the baby weight already…not to say she still doesn’t have a ways to go, but she looked slim and was glowing. As for the baby, Kim and her helper kept a blanket over North’s car seat so nobody could catch a glimpse,” the source said.

Can we just call it a successful c-section and move on? No? OK then.

Can you believe it’s been a month since that baby was born? It feels like only yesterday. And I know everyone still believes this dramatic miracle was off the cuff but it’s still looking play-by-play by me. We knew beforehand that Kim was taking time off post-baby. We knew she wasn’t going to let anyone see her until she worked off a respectable amount of that weight. Sure, the lack of tabloid cover baby photos is a surprise but she had to throw one in there I guess. And we still aren’t completely sure one isn’t coming. Maybe she’s waiting until she’s down to her pre-baby body before she succumbs. And her excuse will be that Nori was so small and premature she didn’t want to rush anything. People will believe it because everyone loves babies!

Anyone out there surprised by a skinny Kim Kardashian’s first appearance? You didn’t think she’d come out looking like a shlub did you?