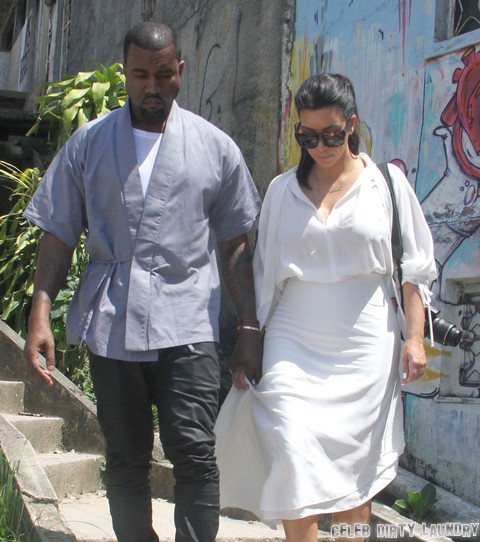 Little North West is 8 weeks old today and that means that she was due for a checkup and shots so it wasn’t too shocking to see Kim Kardashian and Kanye West sneaking into a doctor’s office yesterday attempting to be on the DL. Of course neither parent could actually carry their precious cargo and Nori’s fully concealed infant seat was carted by a nanny that looks nicer (and larger) than Kim and Kanye combined.

As for Kim, she is bundled from head to toe wearing an old denim button down, furry boots and has a coat tied around her waist like we used to do back in the 80’s. I think we all kind of figured that it was going to take Kim awhile to drop the weight but she looks like a real rag-a-muffin here and usually people are presentable for doctor’s appointments! Instead she is messy and that is one word I don’t think I’ve ever used to describe Kim before!

As for the nanny – who brings one to the doctor’s with them – even in Hollywood? If there was any doubt about who will actually be hands-on with Nori and raise her this pretty much erased it. By 8 weeks even first time parents usually understand their baby and are a semi-pro at deciphering cries, needs and everything else! We’ve heard that bonding with her baby is second in priority for Kim. First is dropping all of the 70 pounds she gained while pregnant. From the looks of these photos on TMZ she is failing badly on both fronts. If you are too self absorbed to carry your own child then you better look great by 8 weeks post!

What are your thoughts on Kimmie’s secret reveal? Do you think she’s hiding out because of her weight now? When will her fans get a glimpse of Nori? Will it be combined with a bikini photo shoot someday down the road? Tell us your thoughts in the thoughts below?