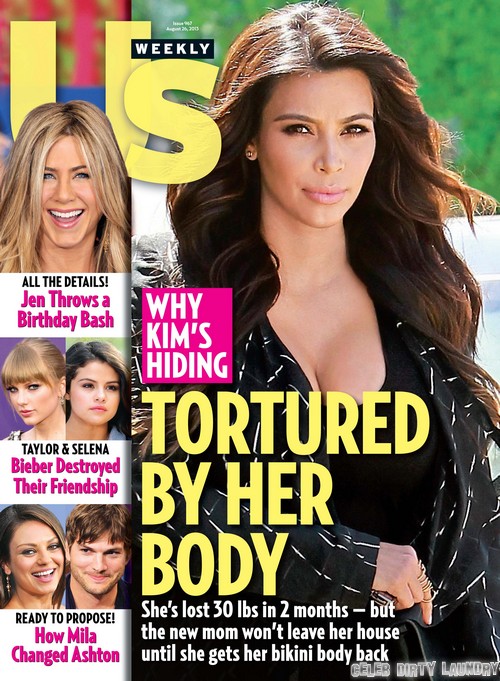 Leave it to Kim Kardashian to have her priorities all jacked up when it comes to focusing on what is most important. She delivered her daughter North West two months ago and has yet to step out into the light of day. If it was anyone else we would probably believe that she was being not just a devoted, but a slightly obsessed new mom and that her daughter is simply the center of her world. However, this is Kimmie we are talking about and according to the Aug. 26th print edition of Us Weekly she is staying indoors until her body is bikini ready.

That’s right. Kim has gone from daily attention whore to self-imposed shut-in status because she doesn’t want a single photographer to catch her at a bad angle. The thing more important than introducing her daughter to real life is showing people that her big ass still knows how to work a red carpet or a raunchy video.

According to US Weekly Kim has already lost 30 of the 70 pounds that she gained but it’s still not enough to really boost her confidence enough to leave the house.

Speaking of women who have gained weight, Jennifer Aniston just threw her fiance, Justin Theroux a birthday bash last weekend that left Hollywood talking for days afterwards. She has also been the subject of pregnancy talk. Do you think that Jen already has a baby on board or is she undergoing IVF treatments that are completely changing her face and weight?

Also in the Aug. 26th print edition of US Weekly, Mila Kunis seems to think that she has single-handedly managed to change Ashton Kutcher and she is ready to marry her man. Do you think that this guy will ever really change or is Mila just the next lady in line that he’ll crush? Tell us your thoughts in the comments below!