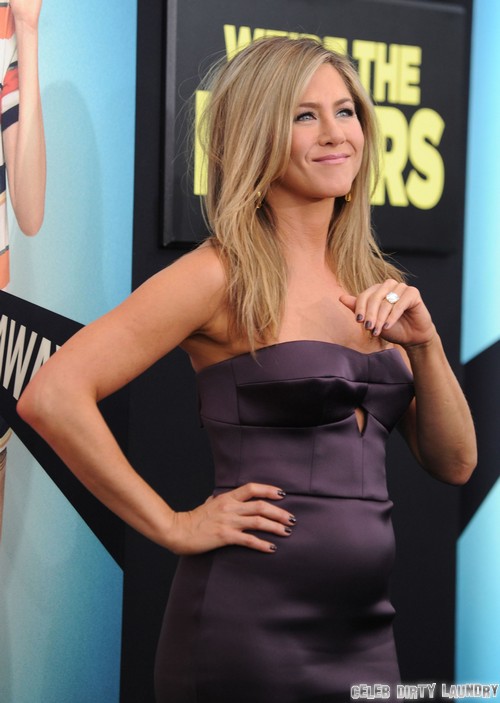 Jennifer Aniston Will Be a First Time Mother by 45 With IVF Treatments – Is She Pregnant Already and Showing a Baby Bump?

You probably have caught a glimpse of Jennifer Aniston in the last several days as she has been out and about doing tons of press for We’re the Millers and trying to show us how lovely she looks without makeup – one thing is for certain, she is looking a whole lot different! Jen is usually lean and cut and looks like she hasn’t skipped a trip to the gym in years, right? Well, not lately. Her bloat, lack of muscle tone and obvious weight gain has sparked rumors that the actress has undergone IVF treatments in order to conceive.

If you caught her on the red carpet she clearly looks early pregnant. Let’s face it, Jen would never step out in a corset dress with a bump like that unless she wanted people to talk. According to the Aug. 12th print edition of In Touch Jen has turned much of her focus towards doing whatever it takes to be a mom by her 45th birthday next February. She knows that at this point her age is working against her and that baby quest has become more important than another wedding.

It looks like Jen might be getting exactly what she wants for her birthday, don’t you think? After years of everyone focusing on her failed marriage to Brad Pitt I think fans would see a baby as a sure sign of happiness for Jen. It would also give the press something else to talk about!

What do you think, is she pregnant? Even Jen’s face is fuller which is a pretty sure sign of some sort of shift in hormones either through IVF or pregnancy. Is she finally going to be a mom? Tell us your thoughts in the comments below!