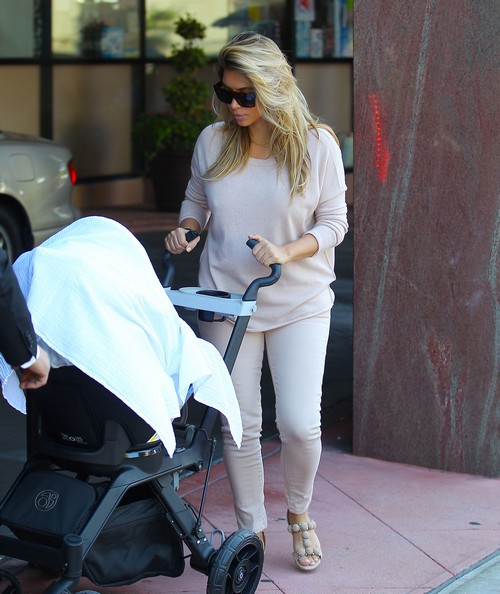 Kim Kardashian was snapped while out and about in Beverly Hills with her baby daddy Kanye West as well as his father Ray, and it seems she has finally ditched those hideous oversized coats she has been wearing everywhere to show off her post-baby body. Since giving birth to North West, Kim has struggled to get back to her pre-pregnancy weight. Uncomfortable with how she looked Kim became a hermit, but as the pounds continue to come off we are seeing more and more of her.

What was noticeably different about Kim’s ensemble was the fact that she ditched her usual sky high heels for comfortable flats. It is weird because Kim refused to wear flats while pregnant even though she was bloated and it looked like all the circulation to her feet had been cut off. Maybe motherhood has changed her after all.

For his part Kanye was content to just stand back while Kim did all the heavy lifting, but when has Kanye ever done the gentlemanly thing. Although Kim’s body is looking the best it has since giving birth she still looks miserable. Smile Kim this is supposed to be one of the happiest times in your life.

Kim Kardashian and Kanye West take their baby North to a doctor’s visit on October 10, 2013 in Beverly Hills, California.