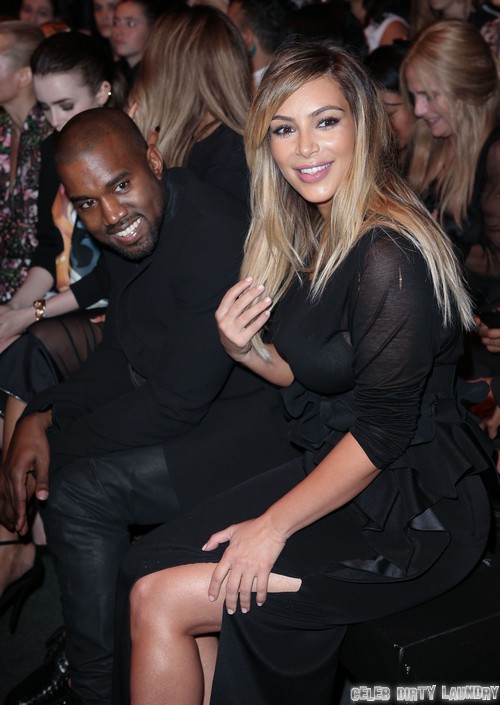 Kim Kardashian just can’t resist showing off, can she? She and Kanye West have decided to ditch their baby girl, North West, with the babysitter while going out and posing for the paparazzi. Kanye is currently in Paris for his European Yeezus tour whereas Kim is there… because she wants to get photographed?

It’s not clear exactly what she’s doing there, apart from spending time posing for the photo-ops with the paparazzi. Kim and Kanye both hit up the Givenchy show at the Paris Fashion week, and Kim’s outfit reeked of an attention-seeking attempt. She wore a deep plunging black gown that showed off her cleavage as well as a slit on one side. As if that wasn’t enough, her newly blonde hair clashed horribly with her outfit, creating an overall effect that was quite ghastly to behold.

Maybe I’m being too harsh?  I mean, it was rumored that Kim had traveled to Paris for some touch-ups on her plastic surgery, so maybe she was just excited to show it off? Contrary to trying to hide from the cameras – like she was doing the past few days – she was proudly posing for the paparazzi this time around. And I don’t know if it’s because of the weight fluctuations, but her face definitely looked different.

What do you guys think? Did Kim go to Paris to get some more plastic surgery? Did she debut her new look at the Paris fashion week, or did she just lose weight and that’s why she looks so different? Let us know your thoughts in the comments.