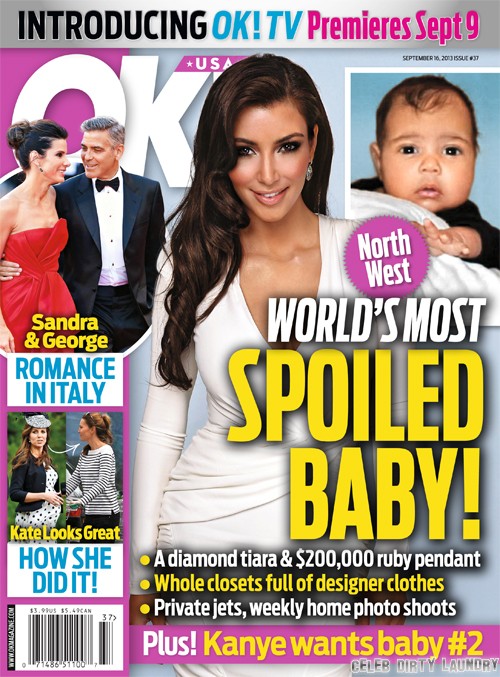 If OK!’s calling North West the most spoiled baby in the world with all that, I wonder what they would call Salma Hayek‘s daughter? Or better yet, what about the sons and daughters of all the oil sheiks in the Middle East? Not only would they have all the jewelry and designer clothes and private jet travel, but they would have ten times more than that.

The report also expands on how Kanye wants Baby #2, even though North West isn’t even a year old.

There’s also some focus on Kate Middleton‘s post-pregnancy weight loss, and how she managed to look so svelte just days after weeks after giving birth – the miracle of yoga, perhaps?

There’s also a section devoted to Sandra Bullock and George Clooney‘s romance in Venice. You know, I used to feel like George was trying to prove something when he always turned up at events with a girlfriend – it was like he couldn’t stand to be single. But now, after all this speculation, I actually feel like he has no choice – if he ever stays single, the press try to set him up with every woman imaginable, no matter how ridiculous the coupling is. That’s exactly what’s happening right now, with him and Sandra. Can’t two celebrities be friends without any romance? Especially two celebrities who have been friends for such a long time? Come on, people.