Kim Kardashian Blasts Paparazzi For Threatening Her Life and Her Baby’s Life! 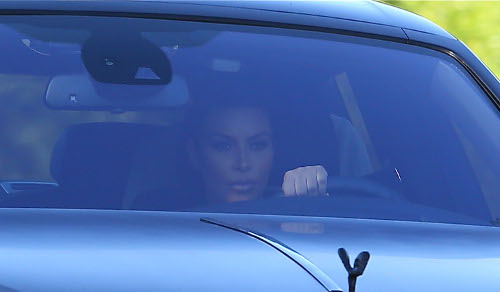 Is Kim Kardashian being dramatic? After having numerous run-ins with the paparazzi this past month, including one where Kanye West hit his head on a pole, it looks like Kim’s finally had enough. She took to Twitter for a long rant against the paparazzi, claiming that they endangered her life as well as the life of her unborn child when they weren’t able to get the shots they wanted.

She wrote, “I wouldn’t let the paps get a pic of me today & they threatened my life & said if I continue to block shots then they will make my world dangerous to live in! How dare they threaten my life & my unborn child! This has gotten way out of control!”

She added that four cars ‘boxed’ her in on the road, and added, “Let me enjoy this last month of pregnancy please without threats & being scared to leave my home due to what dangerous thing they just threatened to do to me. I get I live a public life… [but] I’m 32 yrs old now, about to be a mom. I’m not 25 clubbing around LA anymore. There’s no excuse for threats & stalking!”

I understand her point of view – if the paparazzi really did threaten her by saying that they would make her world ‘dangerous to live in’, she has every right to be angry. To some extent, all celebrities sign up for this when they choose their career path, and reality stars much more so than movie stars or musicians. However, while I still think the Kardashians are responsible for their own woes, it has gotten slightly out of hand over the last few months.

While I don’t doubt that the amount of attention and press that the Kardashians are getting is beneficial to them, I’m sure Kim’s starting to feel the pressure. Regardless of whether she calls the paparazzi on a regular basis, there’s no excuse for threatening a pregnant woman’s life. Then again, she could be exaggerating what was really said to her in order to gain more sympathy. It’s a cynical view, but when it comes to the Kardashians, nothing would surprise me anymore.