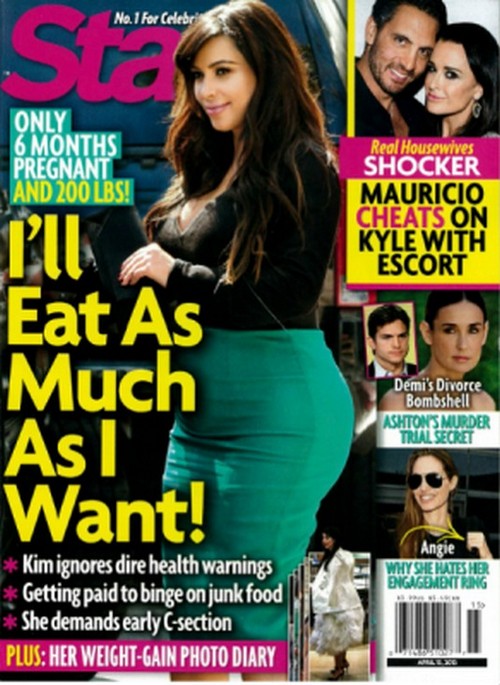 Kim Kardashian is front and center on the cover of the latest edition of Star magazine. The tabloid claims that she is six months pregnant, 200 pounds and she’ll eat whatever she wants!

Kim has been packing on the pounds ever since it was announced that she’s having a baby with Kanye West. The magazine claims that she is eating just about everything under the sun! We’re still of the mind that she’s looking to secure a deal to lose the baby weight with a Weight Watchers contract or something similar.

Her butt is already the size of Texas, so it would only make sense that she wants to schedule an early C-section in order to prevent her hips from spreading even wider. Even better, she won’t have to deliver a natural birth and ruin herself for her rapper boyfriend. This way she can still remain Kanye’s “perfect bitch”. It all makes sense to us now.

It’s either that or she’s having a surrogate carry the baby so that she can fake it through the pregnancy in order to make tons of profit$! Doesn’t it seem odd to anyone else that her baby bump has changed in size drastically? Thoughts?