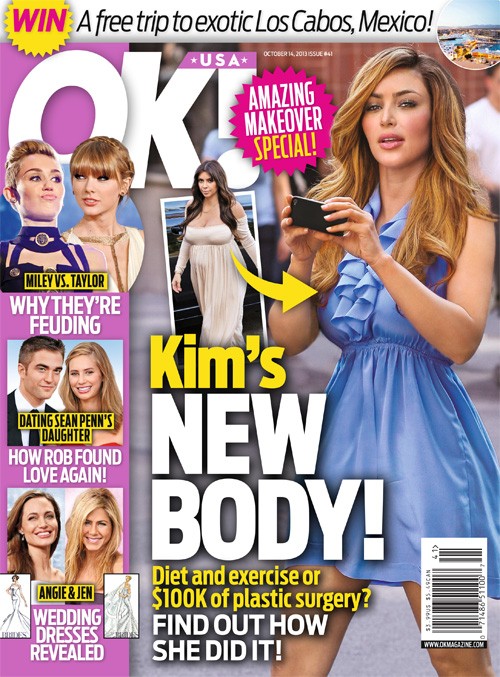 Obviously, instead of dealing with the pregnancy weight like a normal person – a.k.a. going to the gym and exercising – she might have just decided to get some first class liposuction and body contouring in Paris. Why Paris? Well, because the paparazzi wouldn’t be following her every move, and there’s less chances of the news leaking in another country. Clearly she didn’t think it out, because she’s being followed just as much in Paris as she was in Los Angeles – probably more. I suppose it’s not really getting followed if you’re calling the paparazzi though.

Anyway, the new cover for OK! Magazine pretty much alleges the same thing we’ve been alleging, that Kim’s new body is the result of $100,000 worth of plastic surgery, not exercise. You think Kim actually has the patience for exercise? Please, this is the woman who used a freaking sex tape to get instantly famous. She has no patience to actually work hard and lose weight the normal way.

In other OK! headlines, there’s a report on Miley Cyrus and Taylor Swift ‘feuding’, probably over some guy. Then, there’s a report on how Robert Pattinson found ‘love again‘ with Dylan Penn, which just warms your Twi-hard loving heart, doesn’t it? They seem to be lying low since Rob’s been confirmed to be dating Dylan, which kind of scares me a little… where are you, Twi-hards?

Lastly, there’s a report on how even the wedding dresses for Jennifer Aniston and Angelina Jolie are fighting it out for the most attention. Just kidding – but there is actually a report on how both Angie and Jen have both gotten their wedding gowns designed, and OK! claims to have the exclusive on that.