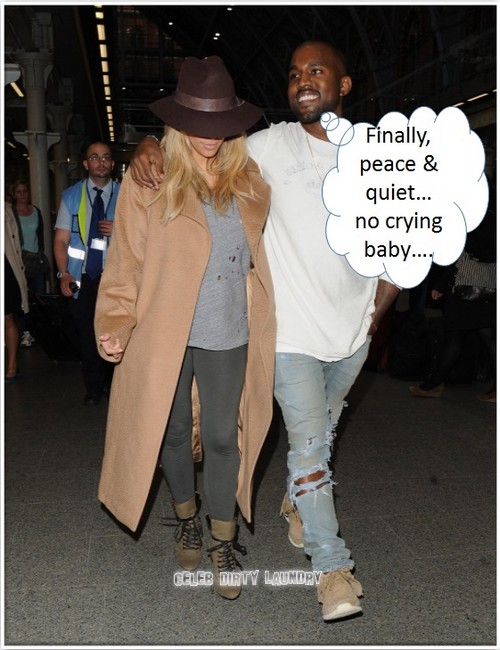 You didn’t really believe that Kim Kardashian has spent the last 3 months willingly at home embracing first-time motherhood and bonding with her daughter, did you? I didn’t think so and it’s smart of you guys to have thought otherwise. Sure, Kim did give birth back in June but we have it on very good authority that the only people really bonding with North West are her team of nannies! Kim delivered her baby and immediately went back to obsessing over her looks. She spent six weeks recovering from childbirth and then willingly was ushered in for an intense round of various nips and tucks in order to give her a push towards reclaiming her once noteworthy body.

It’s not motherhood that has caused Kim to lay low, but instead it has been her recovering from painful procedures such as lipo on top of having a baby that have contributed to Kim’s hellish life. She raised eyebrows last week by taking off for Paris with baby daddy Kanye West without little Nori. Of course Kim told the press she was sad but the truth is that Nori is her newest accessory. She gets attention, looks cute and is then passed back to a nanny. Even Kourtney Kardashian has distanced herself from the sister that she was once really close to.

Think about it, shouldn’t Kourtney be Kim’s closest ally right now? Kourt is a great mom and could really support her sister better than anyone else but instead she is too pissed off to talk to her. Kourtney had hoped that after suffering through Kim’s self absorption while pregnant it would all change once she was actually a mom. Kourt can’t imagine anyone not putting their child above and beyond everything else and to see her niece already bonding more with nannies than Kim infuriates her.

Do you think that there will come a turning point where Kim actually has a wake up call and realizes what is most important? Tell us your thoughts in the comments below!

Check out the pics of Kim and her Parisian Vacation