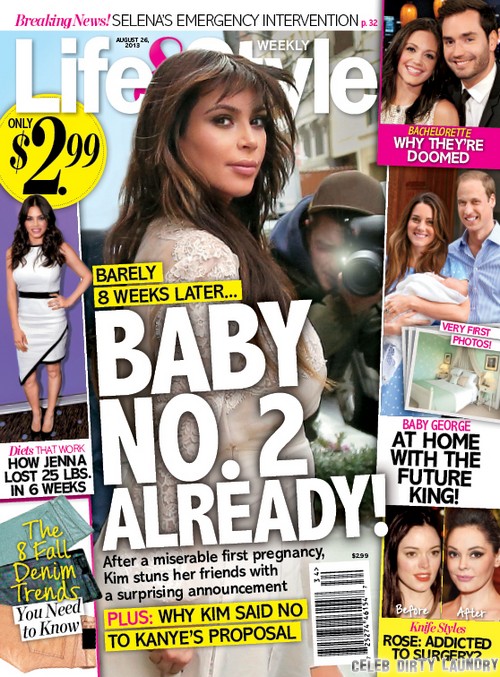 If this story is true then it goes against every single thing that I thought I knew about Kim Kardashian. According to a source close to the reality television whore, she is so completely in love with new baby North West that she is already plotting to have a second child with hot head, Kanye West. Also according to the August 26th print edition of Life & Style magazine, Kim has turned down Kanye’s wedding proposal in spite of us hearing how desperate she had been to get hitched to the rapper.

Perhaps Kim has taken a realistic look at Kanye’s temper as well as his controlling behavior and has wisely decided not to be legally linked to that. Would she really have another baby so soon after her first child? I honestly thought her pregnancy weighed so heavily on her that Nori would likely be an only child, didn’t you?

Also in the new issue there is an update on Prince George, the new royal heir. Life & Style takes readers inside the life and early days of Kate Middleton and Prince William’s privileged son. When it comes to losing baby weight, Jenna Dewan Tatum clearly knows what she’s doing as the new mom dropped 25 pounds in just six weeks. She looks super slim probably because Jenna didn’t pack on a million pounds in the first place, making it much easier to bounce back from having her daughter, Everly.

Did you catch the finale of The Bachelorette last week when Desiree Hartsock chose Chris Seigfried as the final man standing? The unlikely couple is now engaged, but will it last? Do you thibnk that Des chose him because the better man walked away from her or is this a lasting love? Tell us your thoughts in the comments below!