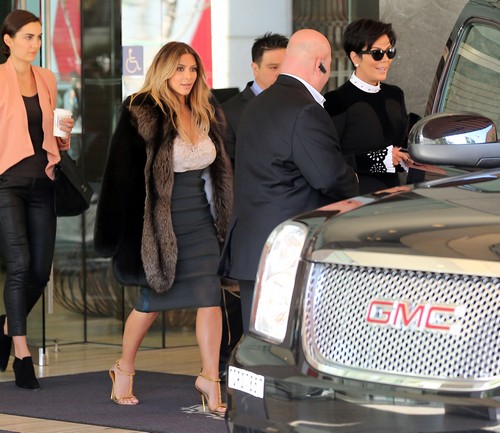 Kim Kardashian and Kanye West are engaged, whoop-de-do. This will no doubt engender endless reports of trouble in ‘paradise’, Kim and Kanye going through marital issues, wedding planning, etc. But when you think about it, I really don’t think Kanye had any idea of what he was getting himself into when he proposed to Kim.

Sure, he thinks he loves her, and I’m sure he’s convinced that she loves him back – and he has to know that she loves the attention that their relationship brings her. But at the same time, Kim is actually worth money now – like, actual real money. And after seeing Khloe Kardashian go through her husband cheating on her, I’m sure the thought has entered her mind. After all, Kanye could have practically anyone he wants, and I’m sure strippers in Vegas will be trying their best to hook up with him and leak details of their dalliance to the tabloids.

So when we heard that both Kim and Kris Jenner [of course] are demanding a $10 million cheating clause in the pre-nup, it wasn’t shocking. A pre-nup, you say? How surprising! Except it’s really not. Even if Kim was against it, there’s no way Kanye trusts Kim enough to refuse to get a pre-nup, especially after looking at her relationship history. There was quite an overlap between her relationship with Kris Humphries to when she starting dating Kanye, and if it happens once, it can happen again. Sure, Kanye’s a lot more famous, and that’s pretty much Kim’s main criteria – but what if someone even more famous comes along? What if, by some freak miracle, some A-list movie star wants to date her – you think she’d say no?