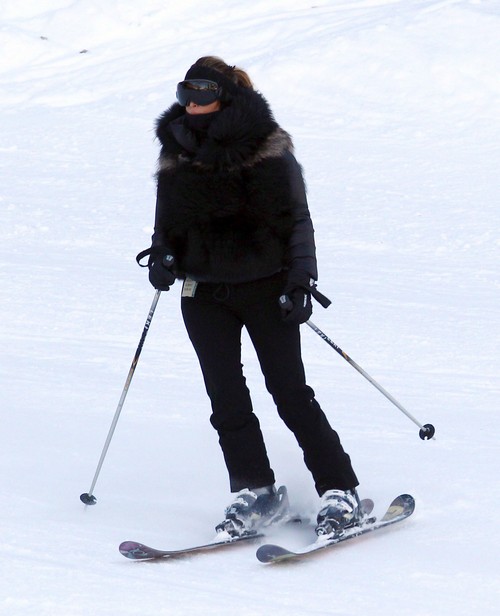 Kim Kardashian has hit the slopes in Utah, making sure that photographers were on hand to document the occasion. Kim is currently in Utah, partying it up with Kanye West, Kourtney Kardashian, and the rest of the family.

2014 will mark the third year in a row that the Kardashians, and specifically Kim and Kanye, have dominated the media headlines. Even though people claim that they have reached a Kardashian over-saturation point, the family continues to stay at the forefront of pop culture. Is it that it takes time for them to go away, or do they really have such prevailing staying power? Keeping Up With the Kardashians continues to post record numbers, season after season, with no sign of slowing down.

Kim, especially, has literally rode her fame train into a giant trumpet in 2013. She got famous for a sex tape, used that to launch the family’s reality show, yet she didn’t reach the media high point until she got engaged to Kanye and had North West. And now, everything she does or Kanye does becomes headline news, without even trying. Is it just brilliant media strategy? What is the fascination?

Whatever it is, we’ll have to wait until 2014 to find out whether it will stay. Is it time for another reality show sensation to take over the tabloid covers and media airwaves? Or has Kim brought herself a few extra years in the spotlight thanks to her engagement to Kanye? What do you guys think? Let us know your thoughts in the comments below.