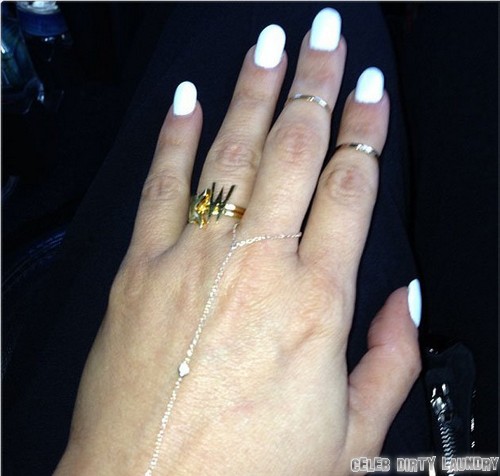 Reality star Kim Kardashian is letting off some big hints that her boyfriend Kanye West may have already popped the question. Is there a KimYe wedding in the works? Of course she cannot get legally married to Kanye prior to her divorce from Kris Humphries being finalized, but that doesn’t mean that she and ‘Ye can’t get engaged!

Kim took to her official Twitter account to show off the special “KW” ring that she’s wearing on her engagement finger. We’re guessing that it’s because he has either asked her to marry him (once she can) or it’s because she has promised herself to him. Sappy, we know.

As you’ll recall, Kim and Kris married in a disgustingly huge televised wedding and sold all of the pictures from the ceremony to the highest bidder. It was a most lavish affair, only to be squashed by her divorce filing just a mere 72 days later.

Kim has already said that she and Kanye want to keep their baby off of her family’s reality show. But despite that, it has been rumored that their offspring will be available for pimping out via momager Kris Jenner’s new talk show when it airs. These people are disgusting, really.

Recently, it has been reported that the divorce proceedings are putting an extra undue strain on Kim’s pregnancy. Perhaps that might backfire on her, considering that she wants to hurry things up with her divorce? Maybe Kris will petition the court to have the proceedings placed on hold until Kim delivers the KimYe spawn?

Also of note, is the ring part of a slave bracelet? Is she trying to tell her hordes of fans that she’s Kanye’s slave?

Is there anything sacred with these nitwits anymore? We’re guessing not. What do you think?