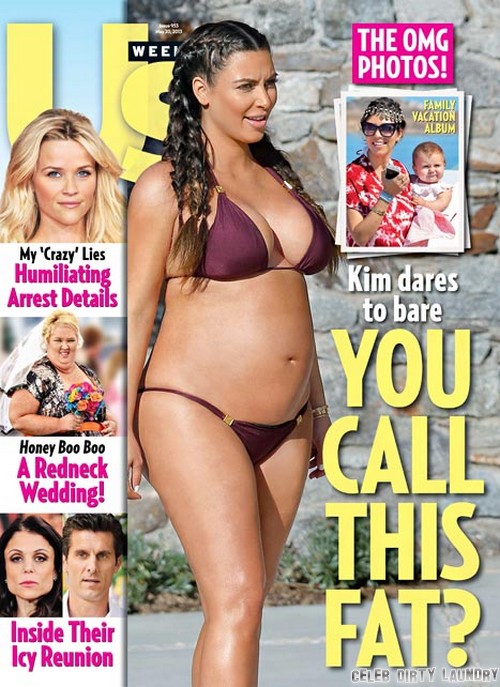 Reality star Kim Kardashian doesn’t appear to look like a fat tubby whale on the cover of the latest issue of Us Weekly. Did she take her extra prosthetic out to pimp out photos of herself in a bikini? Before you start chiming in with the “but she’s pregnant hate”, allow me to explain…

Throughout her pregnancy, Kim’s baby bump has obviously appeared in different sizes. You would think that would be okay if it were just a growing bump, normally. However, it has been apparent to us that it has not only gone up in size, but down as well.

It seems as if one day, she’ll look like she’s six months pregnant and the next, she will look like she’s three months along. Our guess is that she’s padding the bump in order to make herself look bigger. If she does that, then more companies will be clamoring to offer her weight loss deals ala Jessica Simpson. Then, a month later, she can show off her “new” body and attribute it to the weight loss pill/diet or whathaveyou. It’s a genius plan, really.

Still, Kim is showing off her pregnant body on the cover and wants to know if we call “THAT” fat? No, Kim, but we have seen your backside and THAT we’d call HUGE.