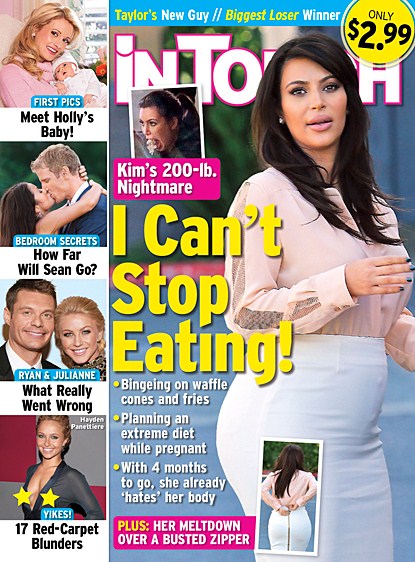 I guess after years of strict diets, extreme workouts and a totally body obsession it shouldn’t be too surprising to hear that Kim Kardashian is absolutely freaking out over her new body. While most women use common sense and realize that this is a time in life to go easier on their body, Kim is being tougher than ever. She’s working out 7 days a week and pouring herself into outfits that just make her look ridiculous. It’s time for her to give up the tailored look and start to ease into a more relaxed style.

Instead Kim has been telling everyone that she hates her body and according to In Touch, she had a meltdown at a photo shoot with her sisters. Kim is freaking out about her weight reaching 200 pounds and seems to have forgotten that she is SUPPOSED to gain weight!

Lots of people were surprised by the split of Ryan Seacrest and Julianne Hough last week. The latest issue of In Touch has an inside look at what caused the rift between the two. It looks like Jules isn’t hurting too badly either. She has been spotted at the beach with girlfriends and a Laker’s game last weekend so life, obviously goes on without Ryan.

Now that the whole world knows that Sean Lowe chose Catherine Giudici to be his wife speculation about the couple is rampant. Sean has been very vocal in his decision to avoid sex until marriage, but celibacy is something new for Catherine. How is the couple finding their comfort zone in this sexless relationship?  Check out the latest issue of In Touch for some of their bedroom secrets.

Are you surprised that Jules and Ryan split? How about Kim and her pregnancy?  Am I the only one that wishes she would just go away for the next several months? Tell us your thoughts in the comments below.