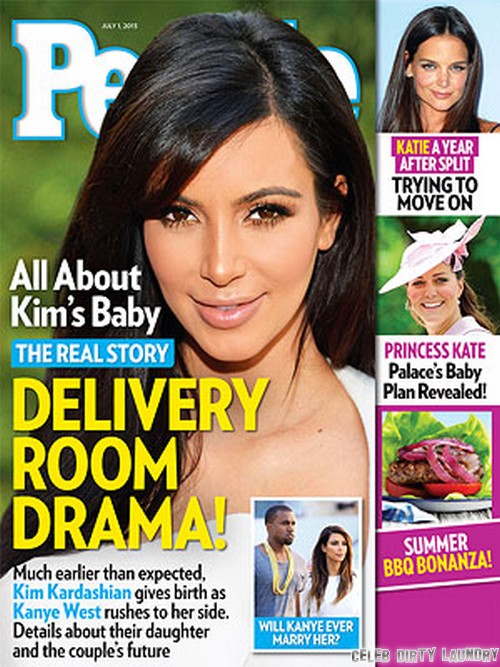 5 days after Kim Kardashian delivered her baby girl we are finally beginning to hear bits and pieces about the circumstances leading to her early arrival. “Baby K” was born only 3 weeks early and is rumored to weigh under 5 pounds and according to the latest issue of People Magazine, a medical situation prompted her her delivery last weekend.

Everyone is anxious for details and this issue has all of the details coming from those closest to Kim and baby daddy, Kanye West. We’re still waiting to hear what the tiny tot has been named but according to a source she has a head full of straight dark hair and Kim’s lips. That, I must admit, confuses me. I thought Kim’s lips were long gone, hidden beneath a million and one injections, but okay, whatever. I guess the newest Kardashian girl has a full mouth that supposedly has already smiled.

Kanye rushed to Kim’s side when she was admitted to the hospital on June 14th, but how long do you think he’ll stay beside her? These two have been dogged by rumors for the majority of their 16 month relationship, especially since Kanye pretty much abandoned her for the majority of her pregnancy. Will seeing his daughter bond him to Kim in an unexpected way? Is it possible that these two could actually realize that they want to be a family and things will kind of fall into place? Or will Baby K end up being raised by nannies as she’s shuffled between two parents that lead different lives- in different parts of the world? Grab the latest issue of People to read all the details of Kim’s delivery and in the mean time we want you to weigh in on the whole Kimye situation. Will they make it? Tell us your thoughts in the comments below!