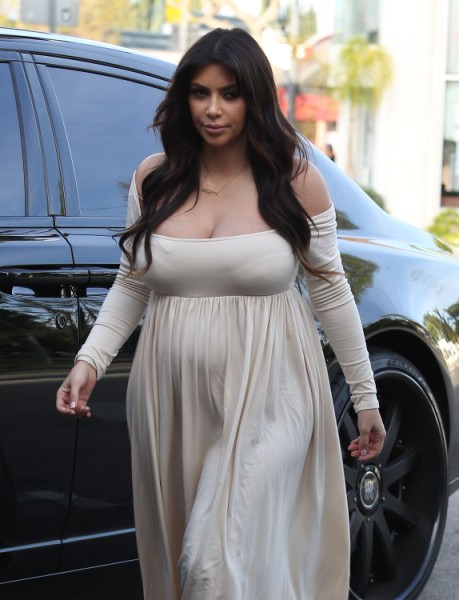 It seems like someone has talked to Kim and she’s finally listening to reason. Her outfits over the last few days have been noticeably breezier and much less restrictive. I’m sure that baby is appreciative. But in that talk somewhere the friend must have tried to lessen the blow by instructing Kim that she may not be able to wear skintight leather anymore but should still play up her assets. Usually for a pregnant woman that means go sleeveless, shorten the hemline or flash a little cleavage. Kim took it to a whole new level yesterday while out filming an ice cream run for her show. She didn’t flash a little – she flashed a whole lot – and basically looks like pirate wench #3 from a really bad Renaissance Fair.

But at least it’s not tits and ass, right? She chose one rather than just going for it all like she usually does. It really is a sign of improvement. Although I’m not really sure she can show both anymore thanks to her “high calorie diet.” Kim Kardashian is reportedly letting herself go for the love of ice cream and chicken and waffles (good choices).  According to the tabs she’s eating every carb in sight because of the stress of the Kris Humphries divorce and the fact that Kanye West is being less than supportive. She’s eating her feelings!

Poor thing. You know what I want? I want Kim to come out and just say she hates being pregnant. Why do we all have to like it? We have too many poster children out there for happy pregnancies. Give me one star who’s like, “Meh, I’m not a fan. I know I want kids but I’m not super fond of my body going to shit and no alcohol for nine months.” I would applaud her for that. We all don’t have to love those nine “magical” months. Sure we can fall in love with the baby movements and get a kick out of the idea of creating life but we all don’t have to be Kourtney Kardashian and rejoice over every minute of it. I would respect her a whole lot more if she was just honest. Maybe I’m wrong though. Maybe Kim Kardashian’s boobs are telling a different story. Maybe Kim loves her pregnant body and uncontrollable appetite. What do you think? Does it look like Kim’s having a good time or are all the wardrobe changes a sign of frustration?