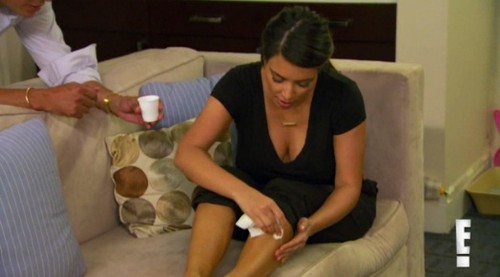 Tonight KOURTNEY AND KIM TAKE MIAMI is back tonight with a new episode called, “Lez-B-Honest.”  On tonight’s show Scott learns about the vibrant lesbian community in Miami, while Kim discovers the benefits of breast milk in treating psoriasis.  Did you watch last week’s premiere episodes?  We did and we recapped them HERE and HERE for you!

Last week was the premiere of Kourtney and Kim Take Miami and it was split into two nights.  In the first night, Kourtney arrived in Miami without Scott; Kim was focused on being a good mom to her new kitten.  On the second night, Kim fertility was comparable to a fifty-year old; Scott planed to race cars.

On tonight’s show Scott learns about the lesbian scene in Miami, while Kim has fun stealing Kourtney’s breast milk to help treat her psoriasis.  Kim steals a precious liquid from Kourtney’s room to combat her psoriasis. Take a peek to see what Kim sneaks off with and if it works!

Tonight’s episode is going to be another drama packed one, which you won’t want to miss. So be sure to tune in for our live coverage of E!’s Kourtney and Kim Take Miami Season 3 episode 3— tonight at 9PM EST!  While you wait for our recap, hit the comments and let us know how excited you are about the new episode of KKTM tonight and check out the sneak peek video below of tonight’s episode below!

RECAP: Larsa is one of Kim’s best friends and they are out shopping with Larsa’s daughter Sophia. Kim really wants kids of her own and has gotten off of birth control so that when she is ready, she will have a stronger chance of getting pregnant.

Meanwhile, Khloe finds a unicorn in the lobby of the hotel and takes it up to her room where she shares lunch with Kourtney.

Kim is on the phone with her fertility doctor looking for more information.

Khloe has a chat with Scott, she thinks Kourtney smells and he confirms that she doesn’t wear deodorant because of her breast feeding.

Scott is looking for some office space and Khloe is there to help him out. It turns out that the realtor has some pretty impressive clients, race car drivers – this really gets Scott excited. Scott’s dream his whole life was to be a race car driver, so this is ideal. Chapman, is a race car driver and he offers to put Scott in a car and get him to try it out.

Back at the hotel, Khloe tells Kourtney that Scott found his soul mate who is going to take him racing and Kourtney’s immediate reaction is that it’s not safe, essentially she is not interested in the whole thing.

Kim goes over to see Jonathan and she starts talking about Kourtney, how she looks like “octomom”. Kim goes on to say the look of Kourtney makes her second guess even having children. Jonathan tells her it is meant to be that she have kids because she is the best looking and best dressed.

It’s dinner time and Kourtney and Scott are meeting with Chapman and Scott is hoping she wore deodorant. Scott is so excited about the dinner, meeting Chapman and his wife. Overall, the dinner goes well.

The next day, Kim goes over to see Kourtney and can’t believe she hasn’t got dressed yet because it is the middle of the day. Later in the day, over lunch, Kourtney tells Scott that she doesn’t want him to get inside a race car. Scott is upset, he doesn’t like Kourtney telling him that she forbids him to do it, like she is trying to control his life. Scott heads over to the racing track angry and gets gifted with a helmut then Chapman tells him that he has a natural ability and thinks he is going to be awesome.

Meanwhile, the women are looking at new real estate property for their Dash store and Khloe is about to faint because Kourtney stinks so bad and it’s embarrassing. Mason takes a deodorant spray from Khloe and walks over to his mom and tells her she stinks like a bear.

Back at the hotel, Kourtney wears a dress and Kim insults her because she can’t get on a dress, she is too big – Khloe tells Kim she should be ashamed of herself.

Scott is back at the hotel, he tells Khloe he just came back from the gym and she knows that he is completely lying. Scott finally tells the truth, he was racing with Chapman.

At lunch, Kim gives Kourtney a hard time again and Kourt calls Kim a b**ch and walks out, tells her to get her own lift. In the parking lot, Kim and Khloe go after her and Kourtney tells Kim that it is none of her business the life choices she makes. In the end, all three get in the truck and head back to the hotel.

Kim heads over to her friends house and has Sophia work on her to destress.

At the hotel, Khloe went shopping and bought four kinds of deodorants and shows them to Kourtney, she tries to “hint” that she is stinky and needs to use it but Kourtney will not use chemicals when she is breastfeeding.

Kourtney arranges a couple massage for her and Khloe, her soul mate. Kourtney goes to the bathroom and when she comes out she catches her telling the staff that she smells. Kourtney doesn’t care, she says she has lots of confidence and doesn’t care what anyone thinks. Kourtney gets a call, Scott was in a crash and is in the hospital with a concussion.

At dinner, Kim apologizes to Kourtney and confides in her about all her numbers being low and how she is freaked out about it. Kourtney is really sympathetic and assures Kim that she will be a mom one day. Kourtney is really looking forward to either of her sisters having kids so they can relate to her again.

At the race track, Kourtney brings Mason to see Scott drive for support and Kourtney is happy that he is passionate about it.