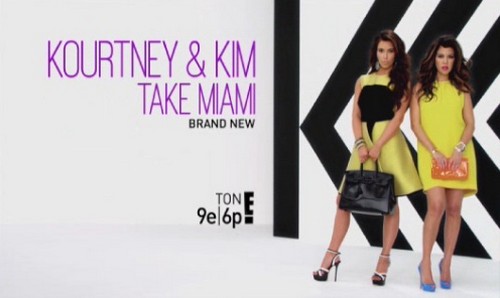 Tonight on E! KOURTNEY AND KIM TAKES MIAMI returns with a whole new episode called, “”Lord Disick in the House”.”  On tonight’s show Khloe gets a hosting job; Scott wants to give Lord Disick a royal introduction; Kim and Kourtney get competitive.  Did you watch the last episode? We did and we recapped it for you!

On last week’s show Kim’s crime fighting fantasy is about to get real.  Also last week Scott risked his life ;-) by telling Kourtney that she was fat and that she needed to lose weight.  Also Kim warned Kourtney that she had to start treating Scott like her husband and not her son.

On tonight’s show For Kourtney & Kim keeping up is never enough, but Sunday it’s Khloe’s turn in the spotlight and the glare is starting to burn.  Khloe is hosting The X Factor and sisters Kourtney and Kim are watching and they are horrified because you can see Khloe’s nipple though her top.  They weren’t the only ones horrified.

Khloe is stressed out of her mind and feels like she is letting everyone down.  Khloe starts to question whether maybe she bit off more than she cold chew.  Since she has since gotten fired, clearly she was right!

Tonight’s episode is going to be another drama packed one, which you won’t want to miss. So be sure to tune in for our live coverage of E!’s Kourtney and Kim Take Miami Season 3 episode 9— tonight at 9PM EST!  While you wait for our recap, hit the comments and let us know how excited you are about the new episode of KKTM tonight and check out the sneak peek video below of tonight’s episode below!

Kim has come back from her birthday trip in Italy with Kanye. She tells Kourtney of what she and Kanye did while there.
Khloe comes back to Miami. Kourtney asks how X Factor is going. Khloe tells how she auditioned to be on the show; it’s been more than a month and she hasn’t heard anything back. Khloe says she always wanted to be a TV host. Scott says it’s overwhelming when all the sisters are together because it’s never ending girl talk, especially as they start talking about their vaginas.

Scott says he’s not going to London with her to launch their Kardahian Kollection. Scott says it wouldn’t be the worst thing for him to have some time by himself. He says at 29, he never thought he’d have this much responsibility, two kids and in a family that has more people than a small country; he needs a time out.

Sheba gets Khloe a ball for her vagina that she tries out. Scott says he needs some men in his life and so he decides to have some good time by inviting friends over. Khloe complains that the balls aren’t coming out of her crotch.

Kris calls khloe to tell her that she got the job on X Factor. Khloe is happy, but nervous. Khloe has to leave Miami since X Factor shoots in California. Kim and Kourtney decide to exercise and go speedwalk. Kourtney says Kim is so competitive and thinks she’s better than her. They start to race back to the house. Kourtney says Kim’s ass is so big that she doesn’t know how she runs.

Backstage footage is shown of Khloe rehearing for X Factor and they were bad as she stumbled over every word.

Scott decides it’s time to throw a royal party to show that “Lord Discik’ has returned now that the Kardahsian sisters are leaving. He starts shopping for costumes.

It is Khloe’s first live show for X Factor and the makeup artist has not shown up. Kris sends her makeup artist over. Khloe is upset because she doesn’t have her family support as they all have other obligations. Kim and Kourtney are watching the live show from home; they can see her nipple.

Kim and Kourtney are getting leave. A throne arrives for Scott’s party as do the other props. Kim and Kourtney arrive in London. Kim starts complaining that she would have packed their bags better. They call Khloe. Khloe says she did not intend to show her nipple. Kim thinks Kourtney seems very competitive about her vagina but she will lose.

Kim challenges Kourtney to a pineapple contest because it makes the vadge taste good. Kourtney thinks Kim needs more pineapple to win but she will drink more to guarantee it. Kourtney calls Scott and he tells her he’s having a Lordship party. Khloe arrives in London and is still upset by how badly her first day at X Factor went.

Scott’s Lordship party begins. He goes all out as he has petals thrown onto the floor for him and plays up his royalty for his friends. Scott says it feels to hang out with his friends because he can’t remember the last time he had this much fun. Scott is sure Miami will never be the same after this party.

After the party, Scott’s friends have to leae and go back to their families. Scott has to figure something out.

Khloe says that Kris has never been nicer to her ever since she got this X Factor gig. Khloe decides the vagina contest between Kim and Kourtney.

Scott feels there is pressure for him to fill his day; everyone is hanging out with their families and he misses his. Scott suddenly surprises Kourtney and Mason in London. Scott said he thought he’d be okay, but he missed all of them.

Khloe has returned to X Factor and is bemoaning her bad luck. Her dress rips. Khloe’s entire family shows up to support her.